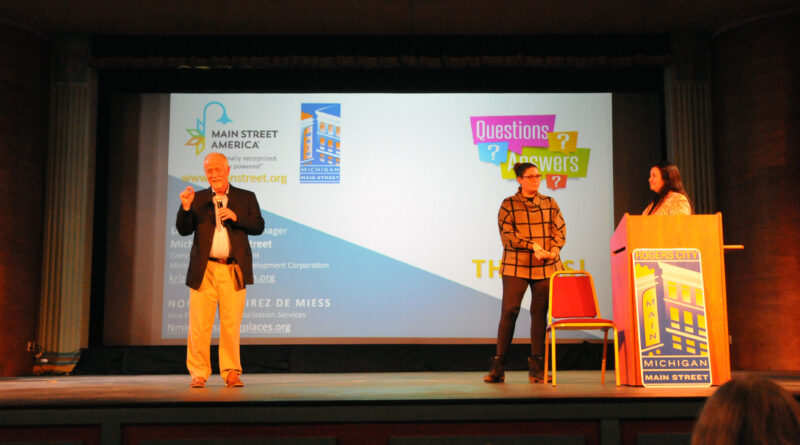 The Main Street program got a motivating boost when representatives from the Michigan and national programs presented a boatload of information last week. Organized by the Rogers City Downtown Development Authority (DDA), the presenters showed results of a community survey to give a baseline for future progress.

Late last year Rogers City became the 25th city in Michigan to be selected as a Main Street community, a national program designed to spark economic revitalization and preservation of historical buildings and culture.

The results were compiled from surveys submitted by 413 community members and 229 identified as youth. Norma Ramirez de Miess, vice president of revitalization services for Main Street America and Laura Krizov, manager of community development for Michigan Economic Development Corporation praised the community for their participation in returning surveys.

Top dislikes of the downtown from the youth were a perceived state of nothing to do, poor roads and lack of food choices.

The busiest shopping day was Saturday with Wednesday coming in second.

More than 50 percent of those surveyed said a clothing store was needed downtown with a pub or restaurant coming in second most needed ahead of a brewery and home goods store.

The analyzed data showed Rogers City was classified as a heartland community, defined as settled and close-knit. The median income was $42,000 with 2.5 people living at each residence.

“Who we are is settled and close-knit. I love that starting point. That means that you really like to come together. I can really work with this group,” Ramirez de Miess said during her presentation.

Krizov said Rogers City seemed an ideal choice for the Main Street designation, that will give the community access to professional services at no cost to the city or the business.

“I think when I drove into the town for the first time my overall impression was that there was huge potential here. From the buildings that are here, the potential development that could happen with new buildings, with you being so close to the water, I foresee five years from now this place looking totally different,” Krizov said.

Rogers City became an ideal place for the Main Street program partly because of community support.

“I think the beauty of Main Street is that it is allowing the community to come and provide what they envision to happen and actually implement it rather than the leadership coming in and saying this is what we are going to do, and that is why Main Street is so successful,” Krizov said.

Ramirez de Miess explained more about the Main Street program after sharing her thoughts at Thursday morning’s meeting of the DDA.

“I love small towns. I can get a sense of place very quickly. Coming to Rogers City was a great experience for me, to go through the downtown, every block and discover the community’s assets. Rogers City is truly strong in natural resources but I think what I enjoyed the most is to really see the spirit of the community wanting to take this downtown and revitalize it.  That will mean an opportunity to really see downtown as the heart and center of activity and to bring people together whether they are young or retirees, business owner, property owner or resident to have main street be an instrument of support to make sure that this community’s quality of life is what everybody wants it to be,” she said.

Main Street America came about as a program of the National Trust for Historic Preservation (NTHP), a national privately funded nonprofit organization founded to preserve historic places. NTHP was founded in 1949 by a congressional charter with the goal of supporting historical buildings and American heritage. Main Street America, established in 1980 is a subsidiary of NTHP, has worked with more than 2,000 communities across the United States aimed at bringing economic vitality back to downtowns while celebrating their historical character.

“They really saw the need to have downtowns come back to life because they saw the buildings were being demolished in the name of progress. They saw identities of communities being turned down,” Ramirez de Miess said.

The Urban Renewal wave of the late 1960s and early 1970s came to Rogers City removing historic buildings in a two-block area and cutting checks to the owners of the property. The Urban Renewal project did not gain overwhelming community support. City voters turned down the request 905-515 in 1968 but the Rogers City City Council got approval in 1969 by a narrow 839-736 count. Ramirez de Miess said that in some ways, the Main Street program is a way to at the least preserve or at the most restore what was left by Urban Renewal.

“Rogers City is not alone. There are plenty of communities that went through Urban Renewal. (Urban Renewal) came and did a terrible job, taking the identity of communities in the name of progress. What Main Street looks at is the heart of what makes it a community,” Ramirez de Miess explained.

She said the program evolved into a movement of people who recognized the need for that.

“The National Main Street center is a public and private sector-based partnership. We look for the private sector to support different efforts. We look for programs at the federal and state level. We have a network of state and local communities,” Ramirez de Miess said.

The city’s affiliation with the Main Street program comes at no cost.

“Most important here is that national Main Street has agreements with states where they host and coordinate at the state level. That is why Michigan Main Street, hosted by the Michigan Economic Development Corporation, is the coordinating pro

That agreement is to help supply resources, but not direct funding, for building the local program. The network allows cities selected for the Main Street program to draw from others’ experiences to enhance economic opportunities at the local level, she said.

The Main Street board will be meeting with representatives from Michigan Main Street next month to go over the survey data.

“They have put that in a format where we can look over the priorities that the community has. Then around that, and looking at all the demographic data they provided, we are looking at establishing some strategic plans for the future,” said mayor Scott McLennan.