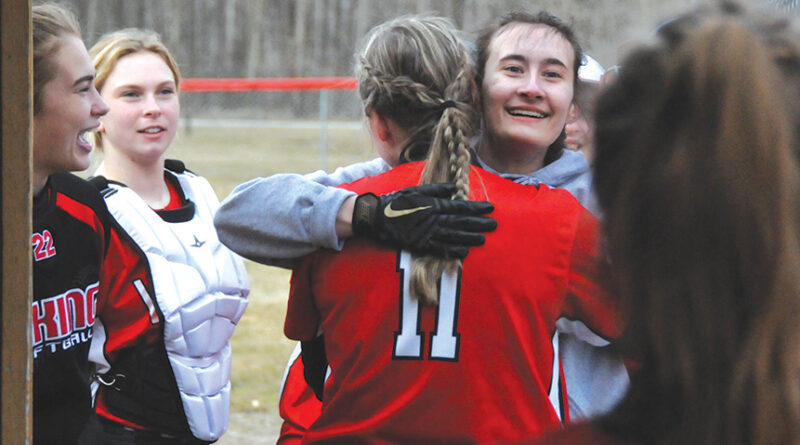 Vikings get sweep of Pellston to open season

The first day outdoors came on the opening day of the high school softball season for the Posen Vikings. After weeks of indoor practice, the field finally became ready for the Vikings’ home-opener against Pellston. Posen took both games, 6-4 and 15-0 as the hitters had great days.

A three-run fourth inning in game one fueled an eight-hit attack and four Pellston errors aided Posen’s cause. Makayla Kamyszek got the win, pitching six innings while allowing two earned runs on four hits and three walks while striking out 12 batters. She also had two hits at the plate.

In the fourth inning, Abi Schellie led off with a walk and moved to third after a single by Madison Kamyszek. After two strikeouts, Schellie scored on a wild pitch and Halie Konieczny followed with an RBI double. She scored on a single from Faith Cousins.

In the second game, the Posen bats banged out 14 hits, highlighted by a two-run homer over the fence in left-center by Konieczny in the second inning. That blast capped an eight-run inning where Posen sent 12 batters to the plate.

Elizabeth Romel pitched all three innings of the mercy-rule game. She allowed two hits and a walk while striking out three. She also had three hits in the game as did second baseman Cousins, who also scored three runs.

Madison Kamyszek had four RBI in the second game.

“It’s nice to get a couple wins being it was the first time being outside. We do as much prep inside as we can and it pays off in these situations. We have some things to work on but overall, I’m pleased with how well the girls played.  Next up will be a big test against state runner-up Rudyard,” said coach Wayne Karsten. Those games with Rudyard were canceled, due to a soggy field in Posen. They will be made up May 19.

In what has become a recent tradition, the Onaway baseball team has been heading downstate to find warmer weather and tougher competition in early April.

Well, the players and coaches found one of the two this past weekend because the weather conditions were not much better in the Detroit area.

The Cardinals did see their first action in a pair of losses to Dearborn Heights Crestwood, 9-6, and Lutheran Westland, 11-0.

In the first game in Canton, the Cards were ahead 4-2 heading into the fourth inning, but gave up two runs in the fifth and five runs in the sixth on three hits, two walks and a couple of errors.

Onaway came back with two more in the top of the seventh on Tucker Price’s double. The team would finish with 11 hits led by three from Luke Lovelace, who also scored one run and knocked in another. Cole Selke had two hits, two walks and scored twice.

To go with the double, Price had a walk and knocked in two. Justin Kramer-St. Germain, Austin Veal, Jack Morgan, Jadin Mix and Anthony Santiago each had one.

In the second game played in Westland, Selke and Kramer St. Germain were the only players to get hits in the three-inning game.

The Cards are scheduled to play at Indian River today against a good ball team.

Vikings swept at home as new season gets underway

The Posen baseball team played their first games of the season, hosting Pellston, and first-year baseball coach Glenn Budnick will have to wait for another day to get his first win in the dugout as the Hornets took both games, 8-1 and 17-1.

Jack Romel started and pitched the first two one-third innings, giving up one hit, two walks, four runs (only one earned), while striking out one. At the plate, he was the only player in the lineup to get a hit.

Ethan Romel would score in the fourth on an RBI groundout from Joey Konieczny with the bases loaded.

“Defense made a few mistakes that led to extra runs, and we didn’t take advantage when we did have runners in scoring position,” said Budnick.

Pellston would score 12 in the third inning of the nightcap. Starter Lucas Mercier took the loss (2 1/3, 3 H, 4 W, 1 K, 4 ER), while Konieczny, Cole Krajniak, Themel and Ethan Soik all pitched in relief.

Ethan Romel singled and would come around to score on a wild pitch.

“We didn’t play up to our expectations,” said Budnick. “There is plenty to work on both with hitting and defensively. We will continue to work and improve.”

The Vikings games with Rudyard April 14 were canceled and rescheduled to May 19.  Posen will be at Mio Monday before returning home next Thursday against Oscoda.