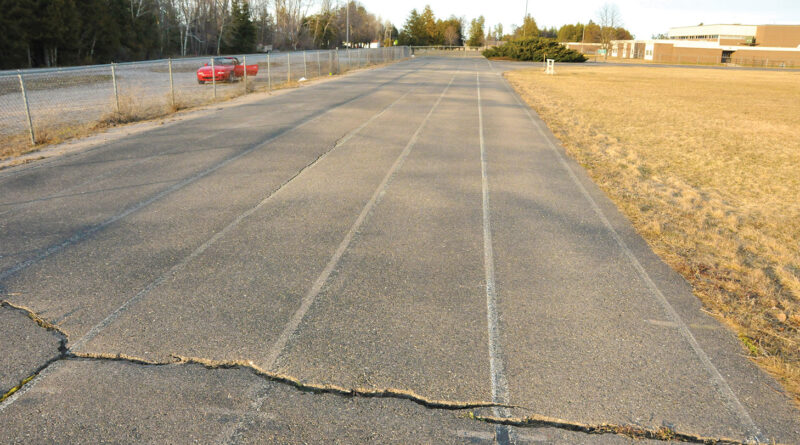 The high cost of doing business in 2022 has caught up with Rogers City Area Schools, who have decided to postpone the resurfacing of the track project until prices start to come down again.

Superintendent Nick Hein made the announcement during this week’s board of education, but also said a pickup purchase and the replacing of the nearly 60-year-old gym floor in the high school has been put on hold.

Instead, expect to see school employees carrying around buckets of paint and replanting of trees to refurbish the grounds of the school facilities.

“Costs are out of control on all things right now,” said Hein. “After talking with Mr. Spens, we are going to focus on small things.

“In talking about the track, since I have been here, it is something I have wanted to do, not just because I think it is important to the school, and those that are in that sport, but currently what we have out there is an eyesore,” said Hein.

The most recent plan was to repave the track and make upgrades so it becomes a regulation track with the correct number of lanes.

Hein has received two opinions from engineers, who believe it can be resurfaced with the needed changes, while another said the old one needs to go before a new one goes down. The cost issue, is the biggest hurdle.

“Two years ago, it would have cost $110,000 and currently it is $310,000,” said Hein, sounding a bit annoyed. “I’m sorry, but this is not going to last forever. I’m not the economist, and people should not be making bets on that, but even the idea that we are going to continue to sell pickups for $90,000 is not going to last forever. That is not sustainable…it is just money we are saving that can go to something else. It will eventually go back to a time where there are six trucks on the lot, and the salespeople will ask, ‘will you please drive one?’ ”

Hein continued, saying the track remains a priority. Athletic director Karl Grambau said at the same meeting there are 20 varsity track and field athletes and 20 more that will participate on the middle school team coached by the newly appointed coach, the Rev. Derek Riddle.

“Anyone with an excavator is booked, they are booked all year,” said Hein. Part of the problem is the federal money that has been bestowed upon government entities from the American Rescue Plan Act. There is a l

ot of money in the pot for projects and not enough construction firms to handle the uptick in business.

In other board business:

–Bus driver John Brown was hired for double duty in the district as a food servant assistant.

“How does that work schedule-wise?” asked board president the Rev. Dr. Greg Zurakowski.

“He will do his morning run and then come back at 10 a.m. and work through 1 p.m., and then goes back,” said Vicki Paull, administrative assistant/food service director.

–Two fundraising requests were approved. Class of 2024 advisors Kathy LaLonde and Vicky Kieliszewski were given the nod to have the students sell Alpine Chocolate Haus treats, while varsity baseball coach Eric Brege hosted  a cornhole tournament to benefit the program.