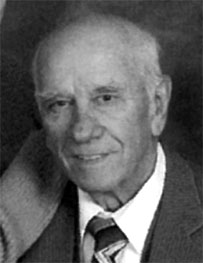 He was born May 30, 1933 in Rogers City, the son of Stanley and Virginia (Rygwelski) Paul. He graduated from Rogers City High School in 1951.

On February 1, 1958, Stanley married the former LaVerne Delvaux at St. Anthony Church in Wells and together they shared 64 years of marriage.

Stanley was an iron worker and part of the Iron Workers Union Local 8. He traveled throughout the country, working on different projects and over the years he worked on many bridges including the Mackinac Bridge and the Houghton-Hancock Bridge. Stanley retired in May 1996.

He was very proud of his Polish heritage. He spent 23 winters in Mesa, Arizona and enjoyed golfing, going to the casino and spending time with family and friends.

He was preceded in death by his parents, Stanley and Virginia Paul; a brother, Ivan Paul; mother and father-in-law, Arnold and Pearl Delvaux; brothers-in-law, Richard Delvaux and Charles Otremba; and sisters-in-law, Mary Paul, Diane Delvaux and Linda Delvaux.

The Crawford Funeral Homes are assisting the Paul family.