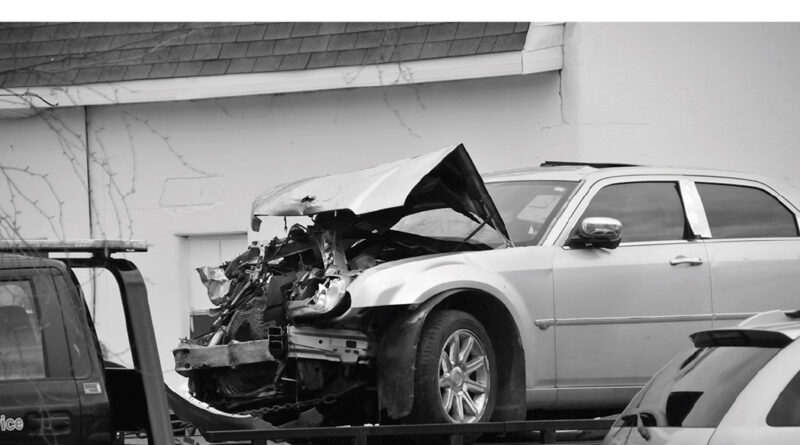 A vehicle being pursued by the Rogers City Police Department failed to make the turn at West Orchard and South Seventh Street and the driver plowed right into the home of Scott and Jessica Wickersham Sunday at 8:30 p.m.

The vehicle is believed to have been going at a high-rate of speed when it continued toward the front of the Wickershams, when it became airborne. There is a separation in the tire tracks on the front lawn of about 30 feet.

Jessica Wickersham was in the living room, only 8 feet away from the first impact spot.

“It sounded like an explosion,” said Jessica. “It was just something unreal that you don’t expect to hear sitting in your living room.”

Jessica was uninjured, but her main concern was the condition of her daughter in the kitchen. She received minor injuries, but was not treated.

The vehicle, a Chrysler 300, spun around and annihilated the wooden porch and put a hole into a wall leading to the basement. When the vehicle came to rest, the front end was facing away from the house and an area of oil had been left behind.

“From what I heard, he came up the hill going 60 to 70 mph,” said Scott Wickersham. “This whole wall where the dirt is, the whole foundation is pushed in. I think for the right dollar amount, it will be repairable. It’s not going to be fun.”

Scott Wickersham was in downtown Rogers City and received a call from his daughter that a vehicle had hit their house, and of course, he did not believe it at first.

The family stayed in the home Sunday night after cleaning up and talking to their insurance agent. One family member commented that this was the second time the house was moved because it used to be on U.S.-23, just south of Rogers City.

eading up the crash, officers attempted to conduct a traffic stop on a vehicle which was reported for reckless driving in the city moments prior.

The driver of the vehicle was transported to the MyMid-Michigan Medical Center in Alpena for injuries sustained during the collision.

Alcohol is believed to be a factor in the accident and the incident remains under investigation by the Rogers City Police Department. The name of the driver was not released to the media.