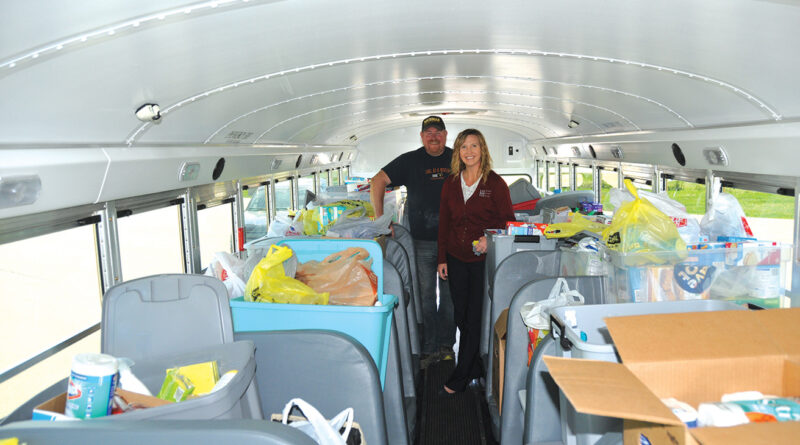 Rogers City responded to the Gaylord tornado relief effort with a bus-filling event. With an idea hatched by Aaron Spens, director of maintenance and transportation for Rogers City Area School (RCAS), residents filled a school bus with nonperishable items to help those in need after an EF-3 (Enhanced Fujita scale 3) tornado touched down in Gaylord last week.

Aaron’s wife and RCAS board of education member Karen Spens and Rogers City High School alumnus Mike Grulke greeted people who brought supplies to the bus Tuesday morning, arranging the items for distribution on the other side of the trip.

“WHAT HAS really touched my heart is the way the community has responded to this drive. Both the school supporting the idea that Aaron had to come up with and Awakon Federal Credit Union partnering with us to bring people in and Tradewinds Bakery this morning donating donuts. The community support and the love that is coming from people’s hearts is what impressed me,” Karen Spens said.

The bus had little room for passengers as the seats were filled with needed supplies headed for Gaylord.

Aaron Spens packed the bus up and drove it to Gaylord Tuesday afternoon to a distribution center coordinated by the United Way.

“It is unbelievable that the people of Rogers City have donated all these supplies for Gaylord,” Aaron Spens said while looking at the bus packed with needed goods. “I am overwhelmed. It is unbelievable.”

The idea gained support from the school district who allowed the trip on a brand-new bus delivered earlier this month.

“It’s a great thing to do the greatest gift you can ever give is one that you don’t expect anything in return,” said RCAS superintendent of schools Nick Hein.

THE GOODWILL extended to the people of Gaylord by the people of the Rogers City area is in sharp contrast to some who are profiting from the disaster.

“Residents who are already struggling in the wake of a natural disaster must be protected from bad actors that are intent on exploiting hardship for their own gain,” said Nessel. “My department’s investigators are on the ground in Gaylord to ensure the price of goods and services are fair and not artificially inflated to take advantage of the circumstances.”

Basic goods and services are top priorities after a disaster strikes and the demand for them increases setting up the possibility for scammers to take advantage.

Michigan law prohibits any retailer from charging a price that is “grossly in excess of the price at which similar property or services are sold,” Nessel said.

Others have tried to take advantage of the situation, according to Spl/Lt. Derrick Carroll of the Michigan State Police (MSP).

Last Saturday, the day after the tornado hit, MSP troopers were called to the Nottingham Forest mobile home park for a report of an unauthorized individuals rummaging through debris at a residence. The two men were confronted and fled the scene into the woods on the south side of the park. One of the men has been identified as of press time.

While at the emergency operations center in Gaylord, Gov. Gretchen Whitmer declared a state of emergency for Otsego County.

“MY HEART goes out to the families and small businesses impacted by the tornado and severe weather in Gaylord,” said Whitmer. “I have declared a state of emergency for Otsego County to rush resources to the affected areas, and the State Emergency Operations Center has been activated to coordinate our state’s response. Our state is grateful for the first responders and utility workers who are working hard to keep everyone safe. Michiganders are tough. We are resilient. And there’s no challenge we can’t get through together.”

By declaring a state of emergency, Whitmer has made available all state resources in cooperation with local response and recovery efforts in the designated area.

“I want to thank our brave first responders, our local police officers and firefighters, as well as the MSP troopers who have stepped up to keep people safe,” said Sen. Jim Stamas. “It is crucial for people to stay inside if possible and stay away from any downed power lines or debris. Let’s all hug our families a little tighter, and let’s all work together to rebuild and recover from this storm together.”