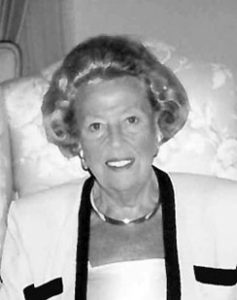 Still working through February, Betty could often be found in her favorite chair in her clothing store decked out in a crisp, white, button-down shirt, camel pencil skirt and piles of gold bracelets on her wrist. A true fashionista, Betty helped dress many women over her nearly 49 years owning the downtown establishment. “That looks darling,” she would often tell her customers who would visit her daily from as far as Rogers City, Hubbard Lake, Long Lake, Grand Lake, metro Detroit and beyond. Some would come in for a new outfit. More would come in for the company and a chance to visit with the energetic and always friendly store owner.

Being born on March 11, 1920, a self-proclaimed “North Side Girl,” Betty grew up on Miller Street in Alpena and was the daughter of Emma (Erickson) and Louis Douville. Her father, a French-Canadian, was a local entrepreneur – owning a bakery, beer distributorship and Alpena Wholesale Grocery among other businesses. Her mother, whose family came from Norway, was a hat store owner in Belding before marrying.

When Betty was 11 years old her older brother, Robert, died of leukemia at age 13, leaving Betty to be raised as an only child. After graduating from Alpena High School, she attended Stephens College – an all-girls’ school in Missouri – as well as Albion College and Cleary College. During her college years, she met and married her beloved husband Frederick T. Johnston January 31, 1942, who was also raised in Alpena. The two complemented each other perfectly. While Betty would command a room with her laughter and fun, Fred – or Johnnie as he was often called – would sit back in amusement while she entertained. Betty and Johnnie had a wide circle of friends, enjoying time at local hunting camps, Lake Winyah Club and winters on Singer Island in Florida. He preceded her in death April 19, 1991.

As Fred spent his career expanding the family businesses including a car dealership, Magnaloy Coupling Co., Huron Distributors Inc. and Alpena Oil Co., Betty focused on raising their six children in Alpena while spending summers on Hubbard Lake swimming and boating with her kids.

But as Betty neared 50 years old she had the urge to fulfill a lifelong dream and own a clothing store. It was then in 1968 that she opened The Country Cousins Shop. In her 2010 memoir “Darling: Tales of a Social Butterfly,” Betty explained: “I love going to work. It’s just like getting up and going to school in the morning. I can’t wait to get up and see my friends.”  Whether she was at her cottag

e with family, at work or sitting in her favorite booth at the Court Yard Restaurant, Betty was always happy to run into old and new friends.

Mrs. Johnston was at the Bannan Funeral Home where visitation took place Friday and continued Saturday at First Presbyterian Church until time of the funeral service with the Rev. Dr. Robert Case officiating.

Interment was at Evergreen Cemetery. Memorials may be made to Hospice of Michigan.