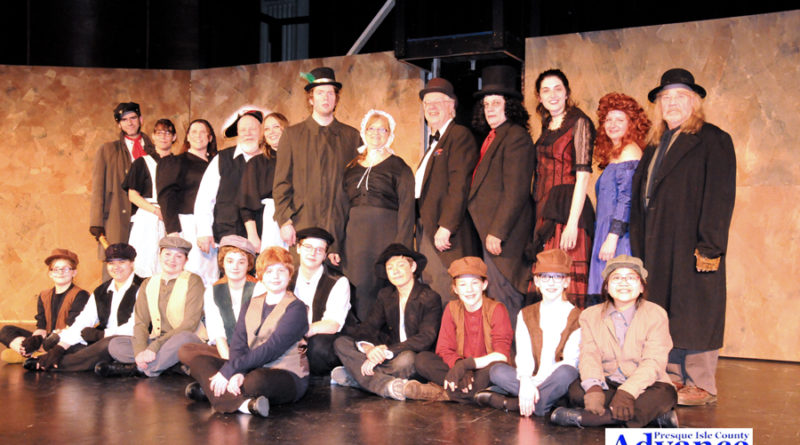 by Richard Lamb–Advance Editor
Laced with familiar songs and a hopeful storyline, the musical “Oliver!” takes to the stage for a two-week run. Produced by the Rogers City Community Theatre, the spring musical takes the audience back to the poor streets of old London in the mid-1800s, as adapted from the Charles Dickens’ novel “Oliver Twist.”
Although following the general outline of the novel, the play is considerably brighter than Dickens’ story. The story revolves around young orphan Oliver, who is sold out of the orphanage to undertaker Mr. Sowerberry. Oliver runs away from the abusive Sowerberry to find adventure in the streets of London with a gang of colorful characters.

Director Donna Klein heads the production, which features 22 cast members from ages 10 to adults. For the director, it completes a circle started when she was a child.
“This is the first play I was ever in. I played Nancy. It’s always been a dream of mine to direct this show. So for me this is a very exciting thing to do,” Klein said.
Oliver is played by 12-year-old Angelee Piechan, a sixth-grader.
“She is doing a wonderful job. We put it out there for boys and girls and the girls knew where it was at so we went with that,” Klein said about casting a girl for the lead role.
“We have a lot of talent here and I’m glad that they chose to come out for our show.”
Other cast members include Lawrence Anderson as Fagin, Bradley Heidemann as The Artful Dodger, Brittany VanderWall as Nancy, James DeDecker as Bill Sikes, Lucy DeDecker as Bet, Gabbe Miller as Charley Bates, Dave Miller as Mr. Bumble, Sabrina Miller as Widow Corney, Edward Perrault as Mr. Sowerberry, Denise Perrault as Mrs. Sowerberry, Baylee Lijewski as Charlotte, Robert Starnes IV as Noah Claypole, Karl W. Heidemann as Mr. Brownlow, Pennie Hoeft as Mrs. Bedwin and Rochelle Martin as Matron.
Members of the youth chorus are Lexia Haske, Nora LaLonde, Izabelle Loughran and Sophia Mina while Katie Adair and Devin Allsteadt are in the youth and adult chorus.
“We know that Dickens is not a comedy writer, but there are a lot of light and comedic moments that the author of the play put into the show. You are going to go out of here humming and singing the songs. There are a lot of songs that are known to the people in the community, especially for those who like musicals,” Klein said. She did caution that some portions deal with mature subject matter and parental guidance is recommended.
“It isn’t a happy play in many respects, but it has a happy ending,” Klein said.
In addition to Klein, who serves as director/ music director other crew members are, assistant director and stage manager, Anne Spens, choreographer Lucy DeDecker, property master Mary Parsons, costumer Valerie Schalk, set building and construction “boss” Karl W. Heidemann, who was assisted by cast and crew members. Lighting technicians are Riconda Lamb and Mike Marx and sound technician is Isaac Riddle.
The play premiered in 1960, making long runs on Broadway before becoming a feature film in 1968. The film version won six Oscars, including best picture.
The play opens Friday at 7:30 p.m. with performances Saturday at 7:30 p.m. and Sunday at 2 p.m. It returns for a second week of performances May 5-7 with shows Friday and Saturday at 7:30 p.m. and Sunday at 2 p.m.