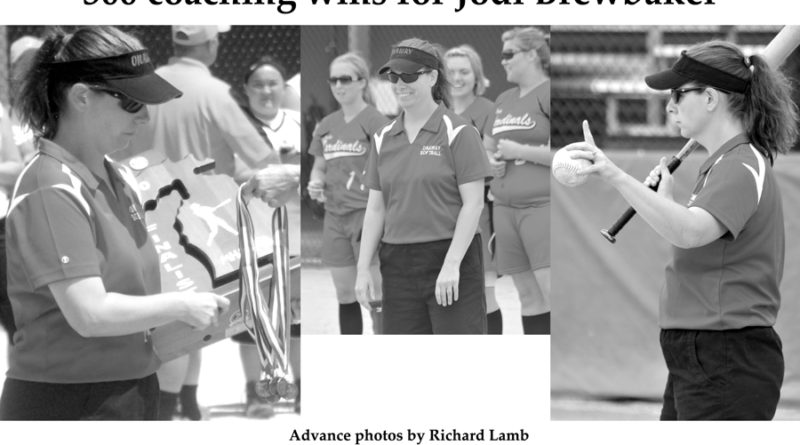 Jodi Brewbaker is already considered one of the best softball coaches in northern Michigan. She took the 2010 Lady Cardinals to a state title game in Battle Creek and lost by the slimmest of margins. It was only 2-1 down there. Did I mention, it was the only loss of the season for the girls?
It was one of the best seasons in the history of Onaway High School (OHS) athletics — led by one of the school’s greatest coaches. 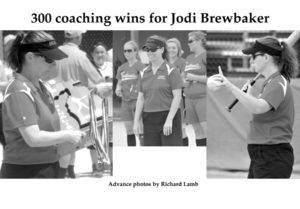 Monday, Jodi reached a coaching milestone with her 300th victory. To celebrate, 300 balloons were blown up and waiting for her when she arrived for classes Tuesday morning.
“That was quite a surprise,” said Brewbaker. Some of the players stuck around after the bus dropped them off around 11:30 p.m.
“I have been blessed with great athletes over the years and terrific assistant coaches,” said Brewbaker. She has been especially thankful to have her father, Don Preston, assisting and keeping the book. That means a lot to her.
TOUGH, BUT encouraging, knowledgeable and driven, she is everything you would want out of a high school coach.
To reach a milestone like 300 is truly a remarkable accomplishment, especially with the tough competition in northern Michigan. For a decade, there were four neighboring schools that were always state-ranked.
And right now, the No. 1 team in the state, Inland Lakes, is one direction down M-68 and third-ranked Rogers City is in the other.
“It was such an amazing milestone to get to,” said OHS athletic director Marty Mix. “All those memories to get to 300. From when she took over the program; dramatic regular season wins; to the postseason walk off home run when they were down in the bottom of the last inning; the state championship run to the double-digit conference championships.”
Retired Posen softball coach and longtime friend Glenn Budnick texted coach Brewbaker Tuesday to congratulate her.
“Jodi is an excellent coach who has a great passion for the game,” said Budnick. “She always has her girls prepared, and coaches them for the entire game regardless of the score. She knows how to get the most out of her players, and I cannot imagine anyone else coaching Onaway softball except Jodi.”
The kids would run through a wall for coach Brewbaker. It seems silly to form that image in your head, but to me, it’s the ultimate compliment for a high school or college coach.
Most of the coaches that fit into that category are in some kind of Hall of Fame. Coach Brewbaker is heading in that direction.