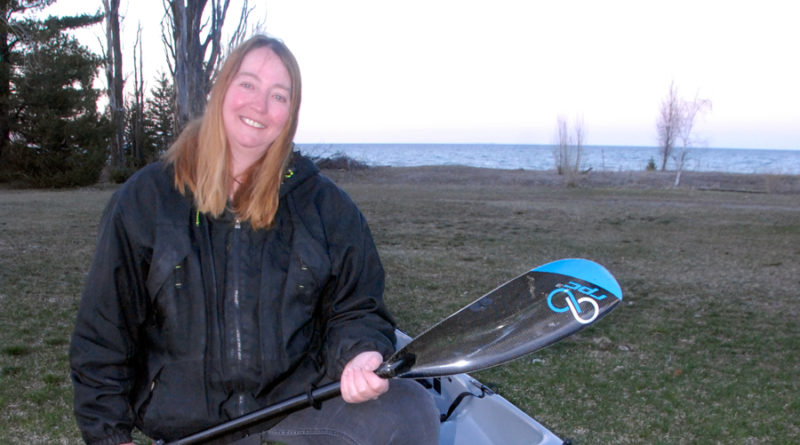 by Peter Jakey–Managing Editor
A Missouri woman attempting to break a world record made it to Rogers City at the start of the Easter weekend.
Traci Lynn Martin, 49, a mother with two children, paddled into the Rogers City Marina Friday night, following a 32-mile day along the coast of Lake Huron.
Martin, along with coordinator Bill Noble, were guests of former Rogers City mayor Beach Hall and his wife Kellie for the evening. They offered Traci a warm shower before taking her out for dinner.
Martin is trying to set a new Guinness World Book of Records by kayaking 8,600 miles in 2017, all in the name of rheumatoid arthritis, an affliction she deals with every day. “My joints hurt, my hands hurt, my feet hurt and the cold makes it worse,” said Traci, sitting comfortably in the Hall’s living room.
Upon arriving in Rogers City, she had gone over 250 miles. Traci would like to average 32.5 miles a day, but that is weather dependent.
The Great Lakes Cruising Club has given her sponsored membership for the year.
Traci started her journey March 9 in Port Huron and encountered rough conditions on Lake Huron, including ice and fog.
The elements have not been the only obstacles to overcome. Traci received bad publicity in late March along the waters of Huron County at the tip of the thumb.
Traci insists there was a breakdown in communication in multiple areas that contributed to the authorities getting involved.
“There was a lot of miscommunication between myself and my ground support and miscommunication between my ground support and the sheriff’s department,” said Traci.
“People (on the Internet) said I lied to the sheriff, that I told him I would not go back out. I was very careful with what I said to the sheriff. I agreed with him that the ice was bad, but I made sure I did not say I was not going to go back out, because I knew I was.”
Traci said there were many inaccuracies in the media, including the notion that there was a rescue.
“It was a not a rescue,” said Traci. “The story just got out of control, and when I tried to defend myself online, people got very hateful.
Traci, who returned to the water April 8, wants to do something that nobody else has ever accomplished, but the negative news stories have taken away from the record attempt.
“It makes me sad and disappointed that I don’t think that I am inspiring people because of all the negative publicity,” said Traci. “I knew I was going to be dealing with ice and paddling in the cold and I was prepared for that. I have my marine emergency radio, I have my dry suit, three layers of clothes. I had gone out swimming in the ice. So, I know how long I can stay out in the water. I was swimming in the water for 45 minutes.”
Traci is an experienced kayaker, who started racing nearly a decade ago and trains year-around.
Additionally, her boys were very much a part of the planning.
“I did a trailer for my documentary and they were in it,” said Traci. “I think being away from me has been difficult, but we do Facetime every night.” Her ex-husband is living in her house, so the boys did not have to leave home.
She added that part of the aim was to inspire others with chronic illnesses.
Since the ice melted, Traci said the experience has been “amazing. Most of the time I am not thinking of the record and just counting the miles, enjoying the places and the people I have run into. People have been reaching out to us and letting me stay in their homes. I am a stranger, they don’t even know me. I have really appreciated the generosity.”
Saturday’s goal was 35 miles, but she knew the weather was going to hamper that. Being safe is always the number one priority.