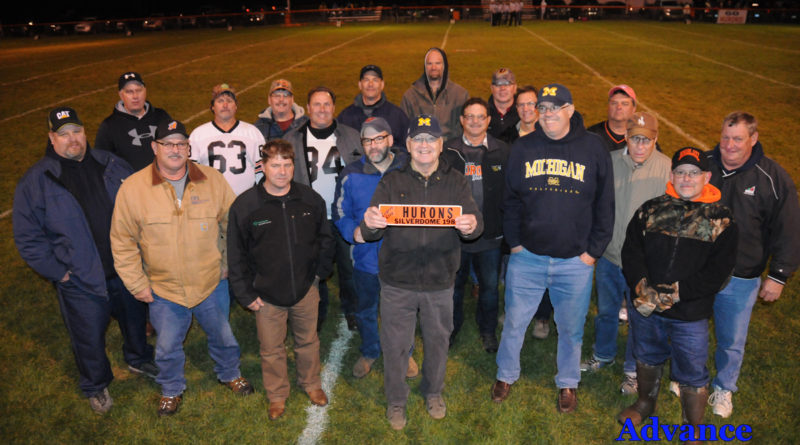 by Richard Lamb–Advance Editor
One of the special sports teams in the county’s history will be honored at Friday’s Rogers City (RC) homecoming game with Mio. The 1982 Huron football team captured the imagination of the area on its run to the state championship game at the Pontiac Silverdome.  Members of that team from 35 years ago will be introduced at halftime, and are featured on the cover of the fall sports program produced by the Advance.
The team played a tough schedule, with many teams no longer on the schedule, but suffered only one loss on the way to the first-ever football playoff berth for the school. 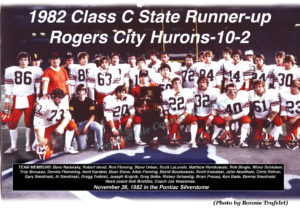 Back in 1982, the Michigan High School Athletic Association (MHSAA) didn’t have the 256 playoff teams bracketed into eight divisions. The playoffs began in 1975 with the first championship games staged at Central Michigan University’s Perry Shorts Stadium. In 1976 the championships were moved to the Silverdome. In 1982 it took two wins to get to the state title game, and the 1982 Hurons were focused on that goal.
Huron football was on shaky ground following the cancellation of the 1976 season, due to a request for a millage that failed. The 1977 team struggled to a 2-7 record and the 1979 team went 3-6.
The Hurons were 1-8 in 1980 and finished the 1981 season at 3-6 after losing the first four games of the season to Onaway, Posen (the Vikings’ only football win ever over RC), Gaylord and Cheboygan. That came before wins over Boyne City and St. Ignace then losses to Petoskey and Charlevoix. The 1981 season ended with a 25-24 win over Grayling.

That led to the magical season of 1982. Here is a brief summary of the games of the state runner-up season:
Sept. 10-RC 13, Gaylord 0—Allen “Oopie” Fleming scored on a 3-yard run and quarterback Steve Urban on a 5-yard run to open the season with a win.
Sept. 17-RC 20, Onaway 18—For the first time in 18 years, the Hurons defeated the Cardinals, coming from behind to win in double-overtime. Halfback Scott Kowalski scored a touchdown in the second overtime to tie the score and then the two-pointer to win it.
Sept. 24-RC 34, Charlevoix 6—Urban three touchdown passes to Kent Karsten, who had seven catches for 84 yards, avenging a 42-22 loss the year before.
Oct. 1-RC 14, Grayling 8—Despite warnings from the coaches, the team came out flat, but did what they had to do to gut out the win. Bob Hood scored both touchdowns for the Hurons.
Oct. 8-Petoskey 28, RC 27—The undefeated bubble burst on homecoming day in Rogers City. The Hurons reached the Petoskey 13-yard line late in the game, but came up short on a passing play. Karsten caught two touchdown passes from Urban and Gary Smolinski caught another TD pass.
Oct. 15-RC 34, Sault Ste. Marie 18—The Urban-to-Karsten connection clicked for two touchdowns and Urban ran for another. Hood scored twice on short runs.
Oct. 22-RC 40, St. Ignace 14—Quarterback Urban hit Karsten for two touchdowns and scored three himself as the Hurons broke loose from a 14-14 halftime tie to clinch at least a tie for the conference championship. Kowalski added a touchdown run.
Oct. 29-RC 42, Boyne City 20—Now eyeing a playoff berth after securing the first conference title since 1971, the Hurons were hitting on all cylinders. Urban passed for two touchdowns to Karsten and one to Gary Smolinski. Kowalski also scored for the Hurons who were now 7-1.
Nov. 5-RC 48, Whittemore-Prescott 8—The playoff-bound Hurons were gaining momentum as Urban passed for two touchdowns to Karsten and one to Scott LaLonde. Hood scored twice and Alan Smolinski capped the scoring with a 5-yard run.

Nov. 13-RC 29, Roscommon 0—Coach Brietzke called it “the best overall defensive effort of the season,” as the Hurons won the first football playoff game in the school’s history. Urban and Kowalski each scored twice for Rogers City and kicker Rob Bingle nailed a 31-yard field goal just before halftime.
Nov. 20 RC 6, Saginaw Saints Peter and Paul 0—“I never thought it would be 6-0, not in my wildest dreams,” Brietzke said. A second quarter pass of 24 yards from Urban to Gary Smolinski propelled the Hurons to the Class C state championship game. Rogers City intercepted five passes as the defense snuffed many of the opposition’s chances.
A key play came late in the game, as Brietzke described the daring call. 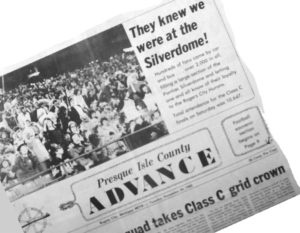 “The second half proved to be a gut-check time for our defense. Several times Saginaw would get close for the touchdown and our defense would slam the door on them. Our defense had played so hard that I made a call on offense I perhaps should not have made. It was fourth and one at the RC 22-yard line. Instead of punting, I called a play known as T-35 dive. Kowalski, with determined running, narrowly picked up the 1 yard and we were able to rest our defense several more minutes,” Brietzke told then Advance managing editor, the late Dick Higgs in 1992.
Assistant coach Joe Veselenak recalled a play that stuck out from the game. “I sent Oopie Fleming, our tough left linebacker, on a blitz and he dropped the Saginaw quarterback for about a seven-yard loss. Right there I felt ‘that’s it,’” Veselenak said.
Hundreds of cars, parents and townspeople lined a three-mile stretch of M-68 to welcome the team home.
“Every game seems to be the most dramatic of my coaching career. This will be hard to top. Our defense did it again,” Brietzke said.
Nov. 27-Detroit DePorres 44, RC 0—The state championship dream might have been shattered, but the 2,000 or so Huron fans in attendance at the Silverdome screamed their support from before opening kickoff to after the game. The Hurons stayed close in the first quarter, but the size and speed of DePorres proved too much to handle.
The late Dave Mix, an assistant coach said this in 1992. “DePorres certainly was a better team, no question that they were better than us, but they were not 44-0 better. It was just that we had played ourselves out the week before and had nothing left for the game,” Mix said.
In an interview for the Advance after the Silverdome run, Brietzke praised the support of the fans.
“I was overwhelmed with the support we had behind us. They were so vocal even when it became apparent that we were going to be defeated. They never gave up and after the game they cheered for us. What I really liked about the season is that it rallied the town together. This town has never been as united as it has been and was today,” Brietzke said.
Mix summarized the season by saying, “What I want to remember about that year is how hard those boys worked, how intense they were, and how much they grew and matured. I have no doubt that every player on that team is a better man because of that experience.”
A REUNION gathering for the 1982 players and coaches is planned after Friday’s game at The Lighthouse Restaurant. Former players Aaron Veselenak, Erik Nadolsky, both junior varsity players in 1982, and Ken Bade, a member of the varsity that year, spearheaded the effort to contact members of that team for the reunion.
A moment of silence will be offered for deceased players Rhiny Schleben and Dennis Smolinski as well as assistant coach Dave Mix.
(A profile of the team members, as it appeared in a 1982 advertisement, appears on page 4B of the Sept. 28, 2017 edition of the Advance.)