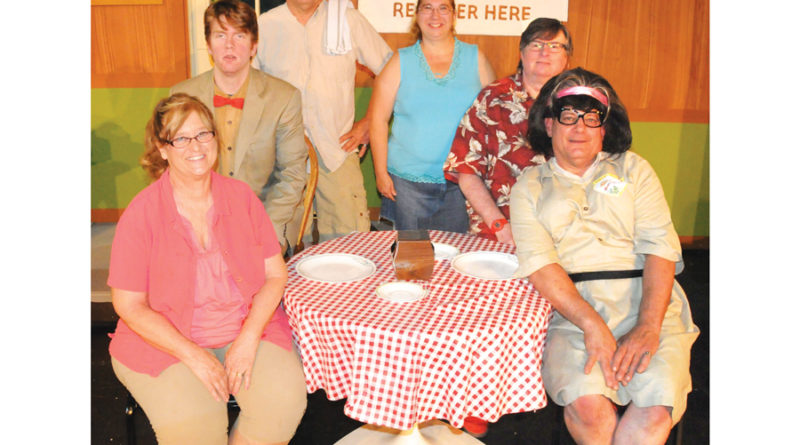 Laughs will be in great supply as the musical comedy play “A County Fair in da U.P. Yah, Sure!” is presented by the Rogers City Community Theatre (RCCT). The production opens Friday at 7:30 p.m. with shows Saturday at 7:30 p.m. and Sunday at 2 p.m. The play will be presented Nov. 3-5 at the same times Friday through Sunday.
The play is RCCT’s adaptation of a musical originally titled “A Don’t Hug Me County Fair” written by brothers Phil and Paul Olson. The duo has written five musicals poking fun at their Scandinavian heritage.

“This has been so much fun and it is such a great cast. They really do a nice job in establishing the relationships between the characters. Humor quite often, and certainly in this case, is based on relationships and what transpires between people creating a situation. Of course things go wrong and that makes it funny, and believe me a lot of things go wrong in this play, but on purpose,” said the play’s director Karl W. Heidemann.
The play is set at the Bunyan Bar in Michigan’s Upper Peninsula at the time of the Miss Walleye Queen Competition. Bernice, the waitress, sees this as her big chance to be discovered and more importantly, to have her face carved in butter at the state fair.
Trouble always follows at the Bunyan Bar when Clara Johnson, co-owner of the bar with her cantankerous husband Gunner Johnson, decides she wants to be the Walleye queen. Things get more complicated and ugly when Gunner’s estranged twin sister Trigger enters the pageant, too.
Adding to the mayhem, Kanute Gunderson, a local fishing guru and Aarvid Gisselsen, a fast-talking karaoke salesman, who is competing with Kanute for Bernice’s hand in marriage, and you have an all-out U.P. battle with every man, woman and walleye for himself.
The show features 18 original songs you will want to sing while eating a pasty including “Our Butter Face Queen,” “Pontoon Ladies,” “I’m Just a Pretty Forest Ranger,” “My Campfire is Burnin’ For You,” “If I Could Win Miss Walleye Queen,” and “I’m a Bunyan Woman.”
“You can turn on the news and get bombarded with all the bad news from all over the world 24 hours a day. But for two hours you can come here and forget about it. That is a worthwhile goal for the community theatre, to give people an outlet or escape as an alternative form of entertainment. You can’t get this anywhere else but on a live stage,” Heidemann said.
The cast includes community favorites Ed and Denise Perrault, perfectly cast as the husband and wife, Gunner and Clara Johnson. Also appearing are seasoned performers Bob Starnes as Kanute and Robert E. Starnes IV as Aarvid. Two new faces to the RCCT stage are Carrie Thornton as Bernice and Pearl T. Rude as Trigger. Karen Maher is the assistant director and Riconda Lamb is the show’s producer.
Tickets are available one hour before curtain time or will be available at the Advance office and the Rogers City Area Chamber of Commerce. Call 989-734-3861 for more information.