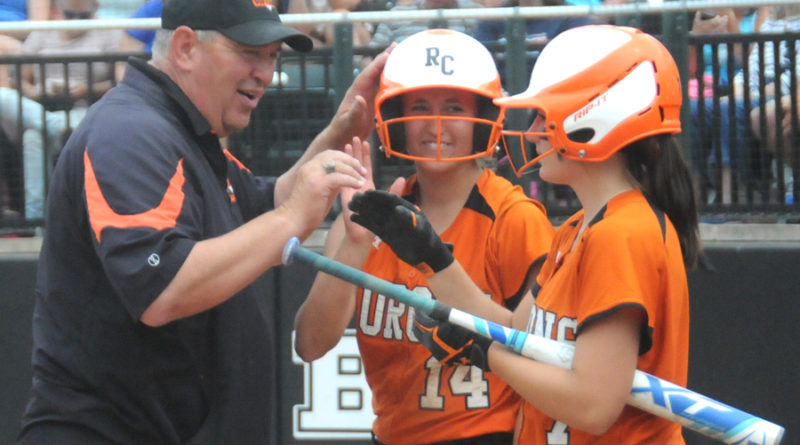 by Peter Jakey–Advance Editor
Dreams of a second softball state championship in four years evaporated when the the bats of the Rogers City softball team uncharacteristically went cold in the Division 4 final four in East Lansing.
It was a contest full of Rogers City web gem’s on defense, but there were never any rewards at the plate as the Hurons managed only three hits and only got one runner to third.
Coleman pitcher Faith Barden struck out 11 and the Lady Comets strung together hits in the bottom of the sixth to score two runs and break a 0-0 tie.
Jazmyn Saile reached first in the top of the seventh inning on an error by the second baseman, but went no further as Barden finalized her strikeouts by fanning the last two batters she faced. The final score was 2-0.
“We made enough defensive plays to win the game, but we just could not get the bats going today,” said Huron coach Karl Grambau, who was making his third trip to the final four. “You have to credit their pitcher for keeping us off guard.”
It’s only the third time the Hurons have been shutout this season. The three hits were scattered in different innings.
The best scoring threat was in the top of the second when two runners were left stranded at second and third with two outs, when the final out was made on a strikeout.
“I’m really proud of my team, because we are a great hitting team,” said Grambau. “Some days, it is not meant to be. We have to hold our heads up high.”
Coleman lost at the semi-finals a year ago, but gets a step further, and a step closer to the state title. Centerville scored three runs on a bases-loaded error to defeat Coleman 5-2 in the championship game Saturday.
A break down of the game and many photos will appear in next week’s edition of the Presque Isle County Advance.