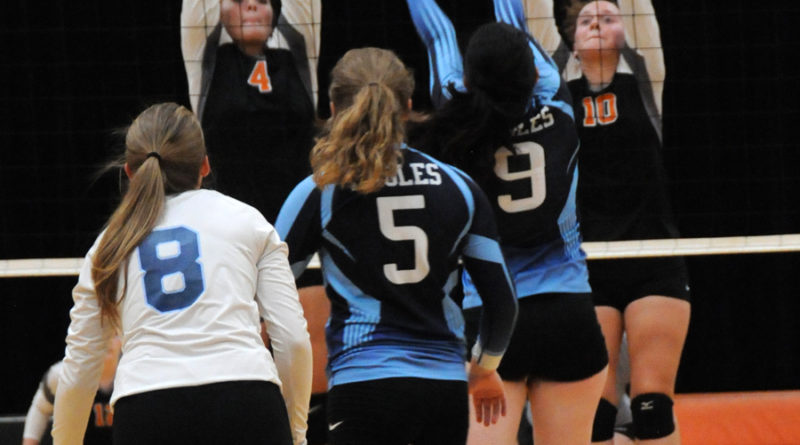 With a sweep over two-time defending Ski Valley Conference (SVC) champion Forest Area at home Tuesday the Onaway Cardinals’ varsity volleyball team is now 15-4 overall and 3-0 in SVC play.
Onaway defeated the Warriors 25-17, 25-18 and 25-20 on the night. “They are the two-time defending conference champions and I am still bitter about two years ago when they got us on our home floor. We had some really nice plays with some really nice hits but we contributed too many errors to the cause. At one point in the second set they scored nine-straight points on our errors. We can’t give points away like that in big matches. We have to take better care of the ball and be ready on defense,” said coach Steve Watson.

In the first set Onaway jumped out to a 4-0 lead and never really looked back as Forest Area would only get as close as two points behind the Cardinals. After falling behind 0-3 in the second set a kill from senior Kennedy Crawford put the home team on the scoreboard. Another kill from Crawford made the score 2-3 and Onaway would tie it up on a Forest Area error.
The tie would be short-lived as the Warrirors then led 5-3 before Onaway climbed back into the game and took a 7-6 lead on errors by their opponent. Onaway controlled the third set from the beginning but Forest Area wouldn’t go away quietly as they tied the game at 18. Onaway then took control again to take the win.
Calley Selke led the hitting attack with 10 kills, two aces and nine digs on the night. Breya Domke added eight kills and five digs. Crawford finished with seven kills and eight digs.
Junior setter Mallorie Neelis had two kills, 26 assists, three aces and five digs. Malaurie McLean added two kills, four aces and led the team with 10 digs. Libero Jordan Larson had six digs and Mattey Horner added three digs in limited action.
Last Thursday the Cardinals hosted the Charlevoix Rayders for the first home match of the season. Onaway swept the Rayders winning 25-15, 25-13 and 25-14.
Neelis had 22 assists and nine digs. Selke had 11 kills, four aces and six digs. Crawford added nine kills, two aces and five digs. Domke had eight kills, four aces and eight digs. McLean added six digs while Larson had four.
Onaway is at the Morley Stanwood tournament Saturday beginning at 8:30 a.m. where they will see some tough competition including the always tough Leland. Tuesday Onaway travels to Pellston for a SVC, the junior varsity game begins at 5:30 p.m.The Huron volleyball is back in action tonight after taking a North Star League match from the Hale Eagles last Thursday.

Hurons sweep Hale; at Hillman tonight
Rogers City swept Hale 3-0 (25-22, 25-18, 25-17) in an evenly played match. In the first set Rogers City jumped out to a 5-1 lead before Hale came back. With the score at 7-6, Rogers City went on a 5-0 run highlighted by kill shots from Shawna McDonald and Kyrsten Altman.
Hale went on a 6-0 run of its own to take a 20-18 lead, prompting Huron coach Jackie Quaine to call a timeout. A cut shot by Altman and another kill from McDonald came ahead of a kill from left-hitter Maddy Hincka for the 24th point. An error gave the Hurons the winning 25th point.

In the second set, the Hurons again jumped out to a big lead only to have Hale battle back. Catheryn Hart’s ace serve started the game as Rogers City jumped out to an 8-3 lead. Middle-hitter Taylor Fleming followed two aces from Altman with two powerful kills to increase the Hurons’ lead to 20-11.
With the Hurons leading 11-8 in the third set, Fleming again sparked a rally. Her two aces and a smash from the back row gave the Hurons a 16-8 lead. Later, leading 22-17 after a Hale rally, two kills from Hincka, a clever tip from Fleming and an ace from Altman sealed the match win.
“We made some major changes. We switched setters and we switched hitters and I really like the direction that we are going. I think the chemistry and flow is better. They are talking and we are moving to the ball and I think that we are trusting our teammates a little bit more as far as knowing who is going to take what ball,” Quaine said.
She said the passing has improved allowing the team to run more complex plays.
Hincka had eight kills and six digs while Fleming had eight kills, 11 digs, four blocks and three ace serves. Altman led the team with 13 digs, three aces and had 11 assists and Kristin Brege had 11 assists and seven digs. Amanda Wirgau notched 12 digs and Hart added two kills and three aces.
The Hurons play at Hillman tonight (Thursday) and have a junior varsity match only Sept. 27. The varsity plays at the St. Louis tournament Saturday.

Posen sweeps then is swept
Posen had an up-and-down week on the volleyball court last week. The up came with a sweep of Whittemore-Prescott last Thursday while the down came with a 0-3 loss to Mio.
Against Mio the Vikings lost 17-25, 17-25 and 22-25.

“We got off to a slow start and never found a groove. There were a lot of errors on our part,” said coach Lori Graham. “Mio is a tough team with solid bench.”
Brooke Ciarkowski led the team with eight kills while Faith Romel had 23 digs and Makayla Kamyszek had 10 assists.
Last Thursday the results were much better against Whittemore-Prescott. Posen won 3-0 (25-21, 25-20, 25-18) in a convincing win.
“They looked great,” Graham said of the effort of the team.
Ciarkowski had six kills and 12 digs while Hannah Stone added 38 assists.
The team is back in action at AuGres tonight (Thursday) and at a tournament in Oscoda Saturday. Posen hosts Fairview Sept. 27 at senior’ night.
Posen is now 2-2 overall and 1-2 in the North Star League.