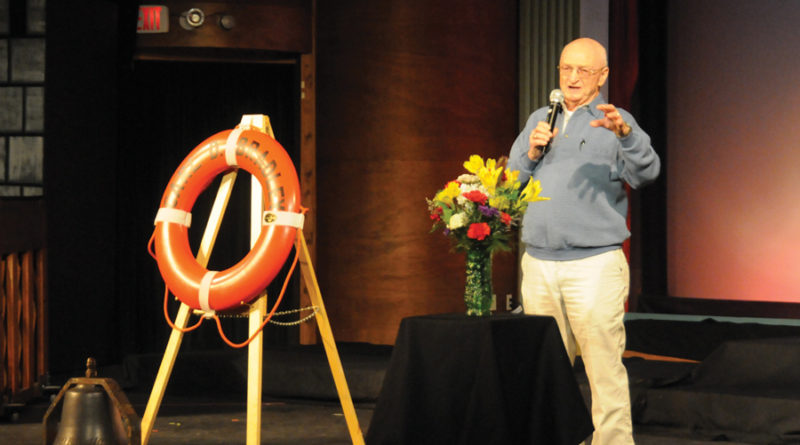 by Richard Lamb–Advance Editor
Tears flowed and emotions were high at the 60th anniversary bell-ringing ceremony in remembrance of the Carl. D. Bradley. The Bradley broke in half in a Lake Michigan storm, the evening of Nov. 18, 1958, claiming the lives of 33 crew members.
The event, sponsored by the Great Lakes Maritime Lore Museum and the Presque Isle District Library, packed every seat in the Rogers City Theater, with many standing in the rear of the theater.  Lore museum board president Dave Erickson welcomed the audience and after presentation of the colors and a prayer from the Rev. J. Derek Riddle pastor of Peace Lutheran Church, the St. Ignatius Catholic School children’s choir, directed by principal Amy Rabeau, presented a song, “The Journey.”
Rogers City mayor Scott McLennan, diver John Janzen and Bradley survivor Frank Mays were featured speakers at the event.
Mays, who signed copies of his book “If We Make It Until Daylight,” recalled the events of the chilling night. He started his 13-minute talk by saying the ship unloaded what crew members thought would be the final load of the season in Gary, Indiana.