Frances “Fran” Elaine Rohrer of Hemlock passed away at home with her family at her side November 13, 2018. 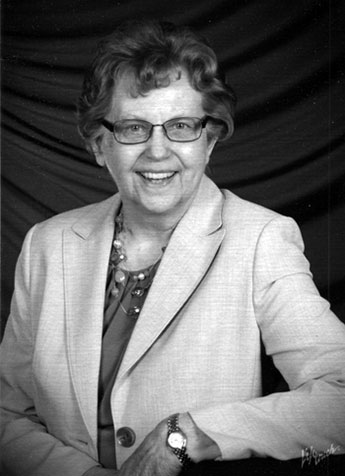 Frances was born in Bowman, North Dakota September 14, 1936. She graduated from Winifred High School and continued her education to receive a Bachelor of Home Economics degree from Montana State University and master’s degree in adult religious education from Loyola University. Fran married Duane Rohrer August 1, 1959 and they were married 59 years. Fran taught in several locations but her primary goal was to raise her nine children. She enjoyed sewing, cooking, crafting and puzzles. She was devoted to the Catholic Church and its charities.

ath by her parents, Wesley Merle and Albertine (Engesser) Scoville; and her brother Theodore Scoville.

The funeral liturgy will be held at 11 a.m. Tuesday, November 20, at St. John XXIII, St. Mary of Hemlock, Church, 151 St. Marys Drive, Hemlock. The Rev. Dennis Kucharczyk will officiate with burial in St. Marys Cemetery. Visitation will be held at the W. L. Case and Co. Funeral Chapel, 201 N. Miller Road. Visitation will be Monday, November 19, from 3-7 p.m. The parish vigil service will take place at 6 p.m. Friends may then call at the church from 10 a.m. Tuesday until the time of the funeral liturgy.

In lieu of flowers memorial donations may be given to a Catholic charity of your choice or blood donations. The family of Frances Rohrer wishes to thank all friends and family for their thoughts and prayers.  www.casefuneralhome.com.