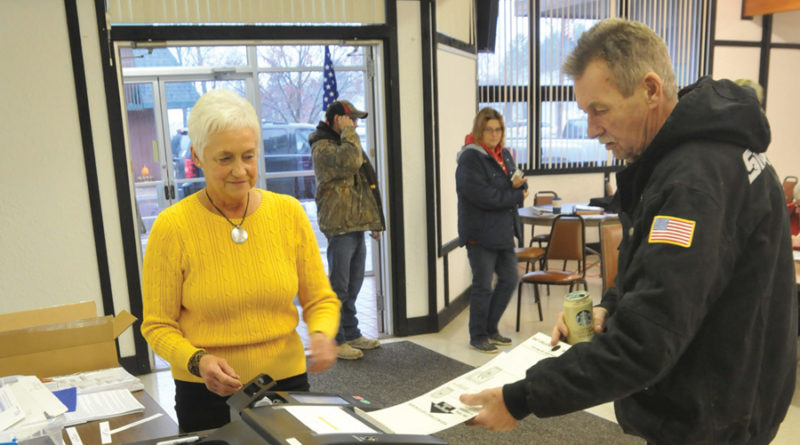 Both candidates in the Presque Isle County probate judge’s race campaigned hard throughout 2018, and when the final votes were counted Tuesday night/Wednesday morning, Erik J. Stone was elected to replace Judge Donald McLennan at the start of 2019.
Stone made up the votes he needed after finishing second behind opponent Katy Conklin in the August primary. He received 3,584 votes, while Conklin pulled in 2,783.
He won 13 of 17 precincts across the county, including both Rogers City precincts by a combined vote count of 840 to 499.
On Wednesday morning, it was a regular workday with an early morning court appearance. The longtime city attorney thanked the voters for their trust and support.
“It’s a great community we live in and I am honored to serve them,” stated Stone.
According to Presque Isle County clerk Ann Marie Main, polling places were busy with 62.59 percent, or 10,888 voters, getting out. “The numbers ranged from the high 40s to 70 percent,” said Main, after the final numbers were released after 1 a.m. Presque Isle Township was the last to the courthouse, which is normal for election night.
“It wasn’t necessarily the highest turnout, it just seemed like a busy day,” said Maine. “I visited every precinct and there were steady lines pretty much everywhere.”
The countywide proposal to maintain county buildings, including the century-old courthouse, was soundly defeated, 3,740 to 2,614. Not one precinct gave the nod.
The county board will welcome a newcomer in January as Republican Nancy S. Shutes won by a decent margin over former commissioner Wayne Vermilya (D), 696 to 489. She won all four precincts: Allis Township, 246 to 181; Bearinger, 163 to 88; North Allis 120 to 96; city of Onaway, 167 to 124. Shutes and Democrat John Chappa, who was unopposed in District 5, will join incumbents Carl Altman, Lee Gapczynski and Mike Darga on the board, at the beginning of the year.
In Rogers City, voters said “no” to the Headlee Rollback, 770 to 537, while approving the sale of the water tower property on Doris Lane 1,221 to 111.
Plus, Larry Fuhrman was able to earn a seat on the City Council, narrowly defeating Travis Peltz, who was appointed earlier this year. Fuhrman received 670 votes, compared to Peltz with 627.
The race could not have been closer for Allis Township supervisor with current supervisor Cliff Tollini in running as a write-in. There were 121 write-in votes in the precinct. While it won’t be known how many votes he received until the votes are certified by the board of canvassers, every vote mattered in the race between Republican Bob Anderson and Democrat Rich Nash ended in a tie. Both had 157 votes.
In the village of Posen, the top vote getters were Sherry Romel (72), Margaret Nowak (51) and Thomas Kaszubowski (43). John Rasmussen missed out by only two votes (41).
Both road millages in Rogers Township (295 to 249) and Belknap (172 to 136) passed.
There were no contested seats for school board. The final vote tallies are as follows:
Rogers City: Diane F. Schultz, 2,033; Gregory C. Zurakowski, 1,433. Posen: Anna Soik, 692; Danielle Kowalski, 631; Dennis A. Budnick, 622. Onaway: Collin Hoffmeyer, 1,295; Hugh Penfold, 1,098. It was still unknown how may Onaway write-ins Jeremy Veal received.
In the city of Onaway, Jerome J. Bischer Jr. received 228 votes, while Ronald Horrocks got 166. Both were uncontested.
Other winners were Democrat Gretchen Whitmer, who will be the next governor. Retaining their seats were U.S. Sen. Debbie Stabenow (D); U.S. Rep. Jack Bergman (R); State Sen. Jim Stamas (R); and State Rep. Sue Allor (R). All three state proposals received the thumbs up from state voters, but the thumbs down from county voters.
All election results are unofficial until certified by the board of canvassers. The county board will meet in the coming days.