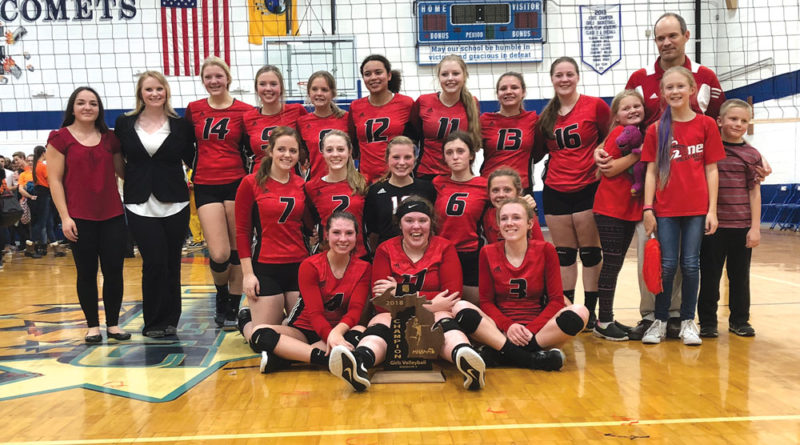 The Onaway Cardinals’ varsity volleyball team won its first regional title since 2014 Thursday in five sets over Rudyard. Onaway lost set one 14-25 before winning sets two and three 25-23 and 25-19. Rudyard took the fourth set 18-25 before Onaway won the deciding set 15-13 in thrilling fashion.

Coach Steve Watson, normally a stoic coach who doesn’t show much emotion walked onto the court when the score ticked to 15 with his arms raised to the sky. “Listen I have been made fun of for a lot of years about being very stoic on the sidelines and not getting very emotional. I have done that for years, because the coaching idols I have they are stoic and they are steady and I have found that my teams usually play well when they are steady. When that thing turned 15 I cried. Oh my gosh we are down 7-3, I am getting emotional just thinking about it; They are halfway to 15 and they are looking tough and we aren’t looking that great, and you battle back and you pull it off,” said Watson.

Set one started close but Rudyard took advantage of service errors to overcome the Cardinals. The teams switched sides and Onaway brought their game. They jumped out to an early 5-1 lead using kills from senior Calley Selke and junior Malaurie McLean as well as an ace from senior Kennedy Crawford.

The Bulldogs did not go away quietly and battled back using kills from seniors Rachel Beelen and Sydnie Zeeryp, the middle hitters who towered over all of the Onaway players.

After winning game three the Cardinals took the 2-1 advantage, however, Rudyard was not done yet as they took game four.

THE BATTLE of the tall, power-hitting team and the scrappy Cardinals of Onaway went to the fifth set. The teams traded points to start the match but Rudyard built a four-point lead, leading 7-3 and forcing Onaway to call a timeout.

A Rudyard attack error gave Onaway an 11-9 lead but a kill from Rachel Beelen gave Rudyard a point. Another kill from Domke made the score 12-10 before a service error gave it back to Rudyard. A tip by Rudyard’s Sara Beelen tied the score at 12 and another Sara Beelen kill gave Rudyard the 12-13 lead. An Onaway timeout followed and a attack error by Seeryp tied the score at 13. Rudyard was called for being in the net to give Onaway the 14-13 lead.

Junior setter Mallorie Neelis stepped to the service line and served the ball in bounds. Rudyard put the ball up and Zeeryp went up for a kill. Cardinals’ junior libero Jordan Larson made the dig and Neelis set the ball to Selke who tipped it over the net.

Rudyard set the ball up and Zeeryp went for the kill, but she was denied by Crawford and Rudyard dug the ball sending it back over to Onaway on a Zeeryp tip.

Selke laid out on the hardwood to put the ball up, Neelis set Crawford who shot the ball to the deep corner, but Rudyard handled it, until the third hit when they attempted to send a free ball over the net and it sailed out of bounds, giving Onaway the regional title.

“This one is really really really special. It’s really special. It is great to be a part of. I am so happy for the girls to have found a way to win. I could easily be talking to you guys about a close loss and how close we came and how much of a fight we put up and how good Rudyard is. And they obviously are excellent, but here I am talking about a two-point win,” said Watson.

It was a night where Onaway was definitely the shorter team, but they were able to win hustle plays. At one point in the match Neelis dove for a ball at the net, popping it up. McLean then hurdled Neelis to get to the ball, resulting in a point for Onaway.

“I knew they would do that. If there is one thing I am stressing to them about it is that we have to win hustle points.  You just saw tonight every thing Onaway volleyball practices and preaches everything we stand for tonight in the fact that we were able to knock off a much taller team,” said Watson.