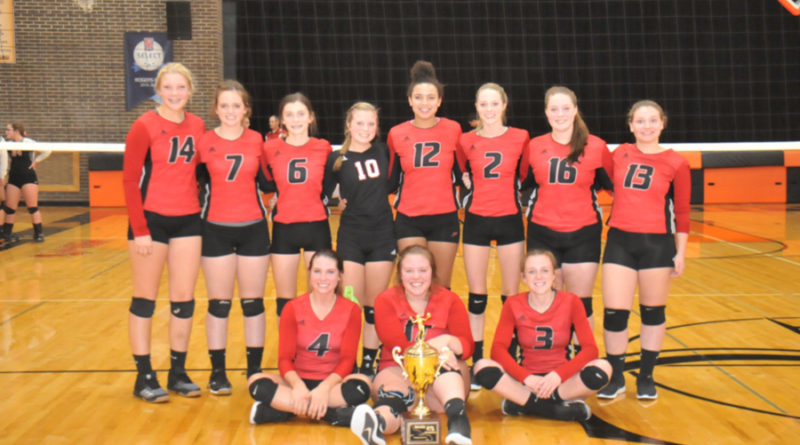 Both Onaway and Posen will play for district volleyball titles this week after advancing from the district semifinals. Posen plays Hillman Friday at 5 in Atlanta and Onaway hosts its own district tournament tonight.

With dominating wins in the quarterfinals and semifinals, the Onaway Cardinals’ volleyball team will battle Burt Lake Northern Michigan Christian Academy (BLNMCA) for the district title tonight (Thursday, Nov. 1, 2018) at 6 p.m. at Onaway High School.
“We have bigger goals in mind. We are going to try to enjoy the moment Thursday. The majority of schools, 75 percent or more, aren’t winning a district title. It is still pretty special regardless of the opponent. I am big on adding numbers to the banner, I want them to experience that. Then they can walk in this gym 10 or 20 years from now and know they were a part of that,” said coach Steve Watson as the team is seeking its first district title since 2014.
BLNMCA contended Wolverine Tuesday in a district semifinal match, taking the match in five sets over a span of two hours, 23-25, 25-17, 22-25, 25-17 and 15-12.
Onaway then stepped to the court taking on Alanson and making quick work of victory as they won 25-8, 25-4 and 25-8.
The Cardinals started out set one with a kill from senior Calley Selke taking the 1-0 lead. A kill from senior Kennedy Crawford and tough serving from junior Mallorie Neelis with two straight aces made the lead 4-0. Crawford stepped to the service line with five-straight aces making the score 12-1 and Onaway never looked back.
Set two was more of the same with Neelis serving the first four points. Onaway used just four servers in the game. In the final set of the night Onaway used a young lineup to finish the game.
“The reality is they all recognize the situation and embrace it for what it is,” said Watson.
Selke finished with eight kills and four aces. Crawford added five kills, five aces and two digs. Neelis added three kills, 12 assists, five aces and two digs.
Junior Malaurie McLean had three kills, four aces and two digs. Sophomore Breya Domke had two kills and two digs. Senior Sunny Flory added three aces and a kill. Ehrke had three kills, Horton had three kills, Taylor Larson added three aces and Nicole Larson had 11 set assists.
The run to a district title started Monday when Onaway defeated Harbor Light in straight sets, 25-11, 25-10 and 25-6. Onaway’s ability to serve tough and take advantage of the Sworsdmen’s error as well as a very efficient hitting night for the Cardinals led to the sweep.
Selke led the hitting attack with nine kills while also adding three aces and eight digs. Crawford added seven kills, four aces and six digs. Domke had seven kills and seven digs.
Neelis added four kills, 19 assists and six digs. McLean had two kills, three aces and four digs.

Cards take county tournament title
The Onaway Cardinals captured the Presque Isle County Championship Oct. 24 in Rogers City. The tournament, featuring Rogers City, Posen and Onaway takes place each year the week before districts and rotates between the three schools.
The opening match of the tournament pitted Posen against Rogers City. Rogers City swept the Vikings 25-17 and 25-11. In a third set Rogers City overcame an early deficit to win 15-12.
Onaway topped Posen by scores of 25-15 and 25-12, Posen opted not to play the third set of the match.
In the final match of the day, the battle for the county trophy, the Hurons and Cardinals stepped on the court. After an ace serve from Catheryn Hart, Rogers City led 1-0 in set one. That lead would be short-lived as Onaway’s Calley Selke notched a kill off a Taylor Fleming block to tie the score. Onaway took advantage of some Rogers City errors and using two ace serves from Mallorie Neelis to take a 8-1 lead.
Rogers City battled back cutting the lead to two at 10-8 in favor of Onaway. After a service error and a hitting error Onaway led 12-8. Rogers City cut the lead to three after a kill by Hart, but that is as close as they would come in set one as Onaway drew first blood winning 25-17.
Set two began and Rogers City this time took the early lead as Onaway started with a service error and attack error followed by a Hart ace to give the Hurons the 3-0 advantage. Rogers City built the lead to 8-2, forcing Onaway coach Steve Watson to call a timeout.
Onaway battled back to tie the score at 11, 12 and 17 but Rogers City took game two 25-18 setting up a decisive third set.
The teams traded points on unforced errors before Onaway pulled ahead with a block by Malaurie McLean to take a 5-1 lead. With the score at 8-2 in favor of Onaway a good tip from Huron senior Maddy Hincka and a kill by Fleming brought the score to 8-5.
A kill by Cardinal sophomore Breya Domke gave Onaway the 9-5 lead followed by two errors by Rogers City making the lead 11-5.
Rogers City continued battling, bringing the score to 14-13 Onaway after a kill by Fleming. With Rogers City serving, Selke smashed the ball cross court and it was mishandled, going into the junior varsity court, giving Onaway the match.
Selke led Onaway with 15 kills, three aces and 14 digs. Domke added 11 kills, three aces and 15 digs. Senior Kennedy Crawford added 10 kills, three aces and 15 digs. Neelis had three kills, 36 assists, four aces and 16 digs. McLean added four kills and six digs while junior Jackie Selke added three aces, three dig, a kill and two assists. Junior libero Jordan Larson added 12 digs.
Rogers City was led on the night by Fleming with 27 kills, 17 digs, three blocks and four aces. Hart added six kills, four aces and 12 digs. Hincka added five kills and Christina Andrzejewski added four aces. Brege had 45 assists and 11 digs while senior libero Amanda Wirgau added 21 digs.

RCHS to play in Charlevoix district Thursday
Rogers City (20-16-4) prepared for its district tournament game, set for tonight (Thursday) at 7 p.m. in Charlevoix, with the North Star League tournament. Playing in Oscoda Saturday the Hurons split with Mio 25-23, 18-25; lost to Oscoda 24-26, 19-25; and finished the day with wins over Alcona 25-20, 29-27 and Whittemore-Prescott 25-15, 25-22.
Coach Jackie Quaine said her team has room for improvement as the season winds down.
“It was not a good serving and passing day for us. When you can’t do that, you can’t do much of anything else. We have to stop those unforced errors,” Quaine said.
Taylor Fleming led the team with 37 kills, five ace serves, 42 digs and two blocks. Kristin Brege had 57 assists, 21 digs and four aces while Catheryn Hart had 14 kills, six aces and 24 digs. Christina Andrzejewski had 19 digs, Amanda Wirgau, Kyrsten Altman and Brooke S

aile had 16 digs each and Maddy Hincka had 12 kills, 21 digs and two blocks.
Rogers City will take on the winner of the Harbor Springs vs. Johannesburg-Lewiston match. Charlevoix plays East Jordan in the other side of the bracket with the winner taking on Inland Lakes in the 5:30 p.m. match today.  Thursday’s winners will play Friday at 6 p.m. in Charlevoix with the district winner slated to play in the Gaylord regional Tuesday. The regional finals will be played in Manistique.
Rogers City made it to the state final-four in Division 4 both in 2016 and 2017. The team plays in Division 3 this season.

Lady Vikings finish runner-up at conference meet
While the Vikings’ football team was winning its playoff game Saturday in Posen, the volleyball team was battling its way to a second-place finish at the end-of-the season conference tournament being played in Atlanta.
The Lady Vikings were back in Atlanta, Wednesday  and defeated the Lady Huskies 3-0 in a Division 4 district semifinal. This time, it was sink or swim time.
The winner moves on the district final Friday against Hillman, a winner over Gaylord St. Mary,  in the other semifinal game Wednesday.
The district final will be played Friday at 6 p.m. The regional tournament is at Bellaire with a doubleheader to be played Tuesday.
If Posen gets Hillman, they have a shot at winning a trophy, considering the scores in Saturday’s conference matchup.
With only six players on the court, and nobody on the bench, the Vikings had a great showing Saturday, first by handling Hillman, 25-21 and 25-18.
In the second match of the day, eventual Little Dipper division winner, Hale, defeated Posen, 20-25, 22-25.
The Vikings nipped Au Gres in a pair, 25-21, 25-16, along with Atlanta, 25-20, 25-19. They kept it going with wins over Fairview, 25-22, 25-16.