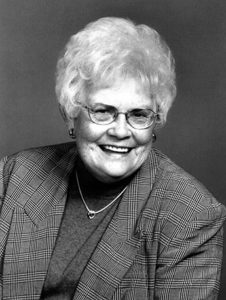 Diane Audrey Shay was born September 20, 1933 in Rogers City to
Everett and Aguida (Paradise) Shay. The oldest of four children, she lived her entire life in Rogers City and was a graduate of Rogers City High School.
On December 28, 1951 she married Milo Grulke at Westminster Presbyterian Church. Diane was employed by the Presque Isle County Sheriff’s Department for 25 years, retiring as a corrections officer in 1994. She also worked as a teacher’s aide for the Rogers City Area Schools.

She was a lifetime member of Westminster Presbyterian Church, where she served as a deacon. She was also a member of the Rogers City Red Hat Ladies. Diane was always on the go and especially enjoyed activities at the Rogers City Area Senior & Community Center. She also liked to play cards and bingo, and to go to the casino occasionally.

In her younger years, she was a Girl Scout leader and also belonged to the Rogers City Ladies Bowling Association. Most of all, she enjoyed watching her children and grandchildren participate in sporting events.

She was preceded in death by her husband, Milo; her parents; two brothers, James Shay and Everett “Jiggs” Shay and a daughter-in-law Susan Grulke.

A Witness to the Resurrection Service is scheduled for 1 p.m. Saturday, November 3 at Westminster Presbyterian Church with the Revs. Dr. Greg and Karen Zurakowski officiating.

Inurnment will take place at Memorial Park Cemetery.
Arrangements are in care of the Beck Funeral Home.