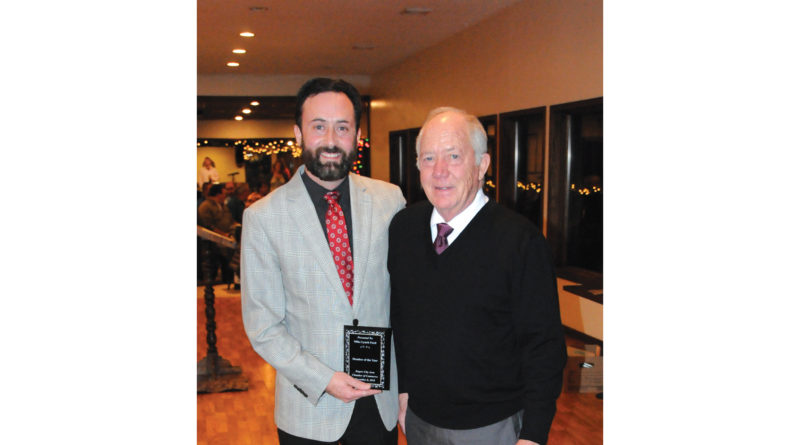 by Richard Lamb—Advance Editor
Mike Lynch Inc. earned the Business of the Year at the Rogers City Area Chamber of Commerce banquet Saturday at UpNorth 23 Restaurant and Lounge. Chamber president Brent Osterhout introduced Mike Lynch and his son Brian Lynch who both accepted the award.
“In 1917 my grandfather (Jay Lynch) was a parts manager for Northern Auto in Petoskey. They had six dealerships. In 1925 they bought the Rogers City store and moved in 1926,” Mike Lynch said.
That was the beginning of a long relationship with Rogers City that continues to this day.
“In 1926 my grandfather went home and told my grandmother Ruth that they were moving to Rogers City. My grandmother said he was so proud,” Mike said.

Jay was going to be the manager of the Ford dealership, but Mike’s grandmother wasn’t so sure about moving. With three children, a nice home and living near her parents, things were good in Petoskey. The paved streets of Petoskey contrasted with the frontier of Rogers City, Ruth said.
“She learned to love Rogers City as I do. My grandfather died in 1953 and they were still living in Rogers City. My dad (Jerry Lynch) was managing a place in Gaylord at the time and he moved back,” Mike said. “He moved back because Rogers City was a place of 5,000 people and Gaylord had about 500. What a change that has been.”
Jerry acquired the dealership in 1961 and the business, located at the time on the Third Street location currently occupied by Basel Oil. The business burned in 1963, two days before Christmas.
“That is a story I could talk about how my dad was throwing snowballs at the fire,” Mike said.
The family bought land at the northwest corner of U.S.-23 and M-68, had it rezoned and moved into the new building in August of 1964. It offered an expanded garage and much more parking space to display new and used cars and trucks.
“In 1972 my dad asked me if I wanted to buy the dealership—I was 22 years old. I said I was going to find a bigger dealership and move out of this little town. But now I love it here and don’t ever want to leave here. It has been 40 great years,” Mike said.
Barb Richards was awarded the Zonta Businesswoman of the Year Award.
“I was very surprised when they told me to be here two days ago,” Richards said. She thanked the Zonta Club and the chamber for the honor.
Mayor Scott McLennan and former mayor Tom Sobeck also spoke to the group.
McLennan said Rogers City is an easy town to talk about.
“We live in gorgeous surroundings. Who gets to live like this? We have the trees. If you ever came to a council meeting and it is standing room only, it is because we are talking about trees,” McLennan said.
He pointed out the walking trails, beaches, summer concert series, the city band, the community theater, historical museums and boat harbor that highlight the community.
“We have so much. We have talked about some businesses closing and that is hard. The loss of those businesses has been a hit to us. But we are adding some things,” McLennan said.
He encouraged those in the room to volunteer to help the community in a variety of ways.
Sobeck said growing up in Rogers City was a great blessing for himself and his sons.
“As I look back on my experiences here, there is a lot to be said about the foundation gained by growing up in a small town,” Sobeck said. “Growing up in Rogers City was probably the best gift my parents could ever give me.”
Osterhout gave a report on the doings of the chamber in the past year.
“We had a little turmoil in 2017. We had a computer crash, so all our finances were lost. So in 2018 we started from scratch. We have struggled to keep chamber directors on for the past three years, so this year when I came on as chamber president, I decided we were going to tear the house down and rebuild from the foundation up,” Osterhout said.
The main focus from the past year, he said, was to reach out to chamber members. Karen Bailey was hired as office administrator.
“We are trying a lot of different things right now. The one thing that we have been trying to do has been on the burner, but we are not jumping into it, is to hire another director right off the bat. We can’t afford them. We have brought in some good directors in the past, but as soon as they are offered more money, they are gone,” Osterhout said.
The chamber has been working “really hard this year” to partner with the Downtown Development Authority (DDA) to fill the position of a director to possibly serve both entities, Osterhout said. No other details of that plan were offered, but it may involve an agreement with the Nautical City Festival committee, which does not have a paid director.
Attendence was estimated at 140 for the event