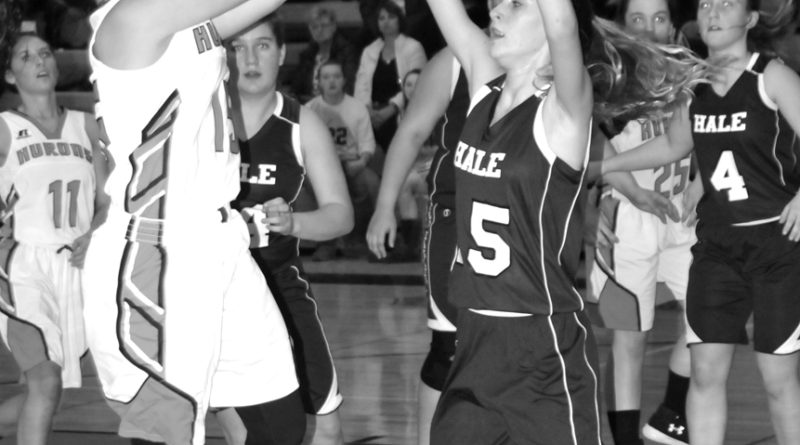 The defense clamped down on Hale in the second half of Tuesday’s home contest and Rogers City came up with its second win of the season, 43-29.
The Lady Hurons were up by only three, 20-17, in the closing minutes of the second quarter when Taylor Fleming came up with a rebound of a missed free throw and put it back up for a field goal with one second left in the first half to make the score, 22-17.
The Hurons came out of the halftime break and put the brakes on Hale by not allowing a bucket for almost five minutes in the third quarter.
It was a rough night for Fleming, who inched closer to the 1,000-point scoring plateau, but there were not too many easy points. She is now only 19 points away.
Rogers City head coach Duane Pitts said his squad went up against a zone defense for the first time this season.
“(Hale) did a good job with their zone and squeezing in on us. We have not seen a zone at all this year, and it showed. So, we have some work to do,” said Pitts. “They were pinching down on (Fleming) pretty hard. We are going to have to get creative to get her into space.”
On the offensive side, Pitts believes his squad was forcing up too many shots.
“That hurt us, but give them credit, they put some pressure on us that led to some turnovers,” said Pitts. “We have to learn to slow it down.”
Fleming scored the first six points for Rogers City and 34 was looking pretty good out of the gate, but it took until early in the second quarter for her to score again.
Linnea Hentkowski fired in a couple of 3-pointers and was the second leading scorer with 10.
The Hurons will take their modest two-game winning-streak to Whittemore-Prescott, Friday.
The Hurons scored 22 points in the fourth quarter last Friday to get by Hillman, 60-56.
“The Lady Hurons heated up in the fourth quarter and went eight-of-nine from the field and six-for-eight at the free-throw line to clinch the victory,” said Pitts.
The victory also ended a nine-year slide of losses for Rogers City on Hillman’s floor.
Fleming led all scorers with 24 points. She had 15 rebounds, five blocked shots and four assists.
Kyley LaFleche put in 12. Kyrsten Altman had nine points and Hentkowski eight. LaFleche and Karissa Rabeau both had five rebounds each.
“You can pretty much throw records out the window when playing Hillman – this is a rivalry game,” the coach added. “I was proud of the fight that the girls put forth in this game and even when it looked a little bleak we kept battling and ultimately found a way to pull out the victory”.

Lady Vikings look for first win Friday
It’s been a slow start to the season for the Posen girls’ basketball, who slipped to 0-4 Tuesday night with a loss at Alcona, 49-37.
The Lady Tigers scored in double digits in all four quarters, while Posen did it only once. Alcona had a size advantage that Posen could not contend with for 32 minutes.
“They used a sizeable advantage to score easy baskets against us,” said Posen’s head coach Karl Momrik. “Once you get past Maddie Menzel, we are extremely short. We competed hard, I have no problem with that, but you cannot go through scoring droughts where you go scoreless for six minutes straight.”
Brooke Cairkowski had 13 points and 11 rebounds, while Lizzy Romel added 13 points.
“We just are not doing enough to win,” said Momrik. “We are competing against everybody we have not been blown out by anybody. We’re competing, we’re just not doing enough to get the ‘W’ right now.”
The teams that Posen has played so far have not lost a game yet.
Liz Henderson and Hailee Gordy each had 18 for Alcona.
Posen is at home Friday looking to end the four-game skid and travel with the boys to Au Gres, Monday. The boys’ junior varsity (JV) plays at 4:30 p.m., followed by the girls’ varsity at 6 p.m. and then the boys’ varsity.
Posen fell to Onaway Dec. 6 at home 39-49. Posen led to start the game on a basket by Menzel a minute into the game.
The Vikings would never lead again trailing 14-10 after one and 31-18 at the half. After three it was 39-28.
Menzel led the scoring attack with 14, 10 of those in the second half.
Ciarkowski added six, Riley Krajniak had five. Romel, Anissa Eagling and Abi Schellie each added four.
Posen lost the JV contest 59-16. Ava Wesner and Sophie Romel each had six points in the loss.

Onaway starts season with two road wins
The Onaway Cardinals girls’ basketball team is off to a 2-0 start, defeating Ski Valley Conference foe Inland Lakes on the road Tuesday 51-40.
Seniors Zebany Box and Kennedy Crawford did all the scoring for the Lady Cards in the first quarter with seven and nine respectively as they led 16-7.
Crawford would add five more of her game-high 24 in the second quarter and Onaway led 28-16 at the half.
A slow third qua

rter by the Cardinals allowed the Bulldogs to cut the lead to 36-30 with one quarter to play. Senior Calley Selke entered the fourth quarter with just two points but she would score seven in the quarter as the Cardinals took the win.
“We showed a lot of effort tonight especially defensively and rebounding. I am really proud of the composure by the kids in a rough game,” said head coach John George.
Crawford led all scorers with 24. Box added 11 and Selke had nine. Junior Jordan Larson added four and senior Britney Buczkowski had three.
In junior varsity (JV) action the Cardinals won 56-26 leading 13-12 after one and 25-16 at the half. Sophomore Breya Domke led the team with 19 points while Nicole Larson added 13 and Lainey Shimel added nine.
ONAWAY STARTED the season at Posen Dec. 6 winning 49-39. Onaway trailed early but took the lead on a basket by Crawford with 4:44 left in the first quarter and never trailed again. Crawford had 14 of her game-high 22 in the first half, adding eight more in the fourth quarter.
Onaway led 14-10 after one with all the scoring coming from Crawford with four, Buczkowski with three and junior Mallorie Neelis with six. It was 31-20 at the half as four more Cardinals got on the board. Onaway led 39-28 after three with Selke scoring six of the team’s eight points in the quarter, her only points of the game.
Junior Jordan Larson and freshman Taylor Larson each added four while Box added two.
Onaway won the JV game 59-16. Nicole Larson and Domke led the scoring with 15 each. Jillian Chaskey added 13 and Cloe Ehrke added 11.
Onaway hosts Central Lake today (Thursday) with the JV game beginning at 5:30 and are at Forest Area Tuesday with the JV beginning at 5 p.m.