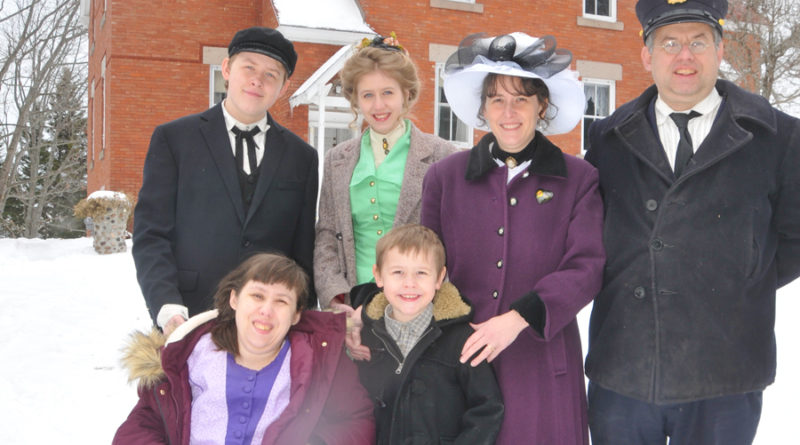 by Peter Jakey–Managing Editor
Being selected as the new lighthouse caretaker at 40-Mile Point Lighthouse is a return home for Eric Klein and his sister, Sabre.
Eric, his wife Lisa, along their three children and his sister, were all approved by the Presque Isle County Board of Commissioners, Jan. 10.

The Klein family plans to move into the living quarters of the lighthouse when renovations are complete in the next few weeks. Wood floors are being stripped down to the original boards and restored to a more authentic look.
The other half of the lighthouse is where the museum is located.
Eric lived there for eight years in the 1980s and 1990s with his parents Rick and Karen Klein, a brother Ian, as well as Sabre.
With a deep appreciation of history and an eccentric side, Eric believes it is a privilege to be able to bring his family to live in a historic site.
Eric is a familiar face around Rogers City, considering he dresses in period clothing as a lighthouse keeper while out in public.
“I get asked if I am a train conductor a lot,” he said with a loud laugh that echoed the walls of the empty caretaker’s quarters since no furniture has been moved in yet.
“I get some really interesting conversation with it,” he said of the uniform. It’s something he relishes. It might be why he has been seen with a Great Lakes’ freighter replicas strapped to the roof of his mini van.
Eric’s family is excited about the move.
“I think it is an extraordinary honor to be able to live in such a historic building with so many memories,” said Cora Klein, 17, the oldest of the three children. “I look forward to growing up here.”
“I love it, said Evan Klein, 14. The youngest member of the family is Anthony, 6.
At the moment, Eric and his family are painting and redoing the wood floors with the assistance of the 40-Mile Point Lighthouse Society (40-MPLS). Painting and refinishing floors is his occupation.
Over the years, there have been many renovations by different caretakers.
In the 1970s, woodwork was pulled for paneling. That’s what Eric had on the walls when he was there.
In the 2000s, the 40-MPLS removed the paneling, and with the assistance of Prell’s Sawmill put up new trim that resembles what has been observed in old photographs.
“In the last two weeks, I have been painting everything back to the way it was,” said Eric.
The first floor has the kitchen, where most people enter on the parking lot side of the lighthouse. The first floor also has a living room on the Lake Huron side and a bedroom on the opposite side that will be occupied by Sabre.
There are three bedrooms and a bathroom on the second floor.
The Kleins won’t have to pay rent and in return will take care of the grounds of the park. However, the family will be responsible for all utilities.
There are only three other publicly-owned lighthouses on the Great Lakes that have caretakers.
“There could be one or two on Lake Erie or Ontario that I don’t know about,” said Eric. “I was telling the family that the privilege of being able to live here was so minuscule. Then, on top of that, to have lived here before.”
Later this year, the Kleins will help in the celebration of the fourth order Fresnel lens that was installed and lit, May 15, 1919.
“It’s coming home and it fits in with my love of history,” said Eric.