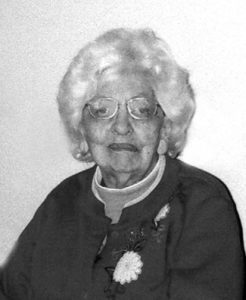 She was born October 8, 1916 in Hawks to William and Minnie (Gowen) Taylor.

Evelyn and Wilbert owned and operated Heller’s Gifts until her retirement in 2012.

She was a member of St. John Lutheran Church. Mrs. Heller enjoyed gardening and baking.

She was preceded in

death by her parents, William and Minnie; a brother, Albin Taylor; and a sister, Edith McLennan.

Visitation was at St. John Lutheran Church in Rogers City Saturday, January 26, through time of her funeral with the Rev. Kurt Lambart officiating.

Interment will take place in the spring at Memorial Park Cemetery.

In lieu of flowers, memorials may be given to St. John Radio Fund in memory of Evelyn Heller.

Online condolences may be addressed through www.beckfuneralhome.org