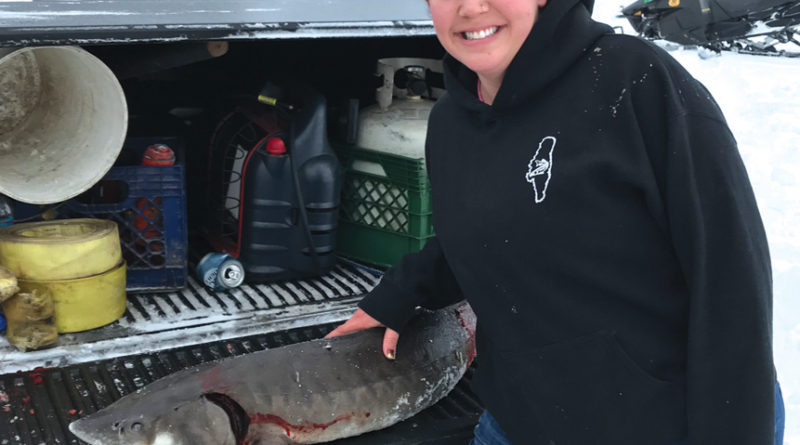 by Peter Jakey–Managing Editor
Six sturgeon were speared in less time than it takes to watch a movie.
The 2019 season took only 78 minutes last Saturday and the Michigan Department of Natural Resources (MDNR) was able to stay right within its quota.
The first sturgeon was taken 18 minutes after the 8 a.m. start. The last one was exactly an hour later.
“Quick season, good season,” said Tim Cwalinski, MDNR senior fisheries biologist. “We were allocated seven fish and set our quota at six fish, and six fish were harvested.”

To not go over the quota, the MDNR put into use a major technological upgrade this year. They used text alerts to close the season to go along with the traditonal cannon blasts.
Cwalinski said about 95 percent of the anglers signed up.
“Text alerts went out to people within minutes, once we knew we had the six fish,” said Cwalinski. “I think that went really well.”
There were four males harvested and two females.
“That’s good for us because we like it when males get harvested,” said Cwalinski. “Three of the fish were tagged from previous years.”
The largest sturgeon was an 80.9-pound female harvested by Robert Dodder near the state park. He speared it at 9:07 a.m.
Tim Raymond, who brought in a 47.8-pounder that measured 60.5 inches, took the largest male. It was the final one of the 2019 season.
There were 403 anglers registered for the season. The majority of them signed up on Friday, while there were 21 stragglers on Saturday.
“We had about 25 fisheries staff working it,” said Cwalinski. “That’s a significant amount of effort for our fish division. We had about 17 law enforcement officers working it as well.”
Regarding conditions, the ice was plenty thick, but trucks were getting stuck out on the lake thanks in part to the big storm a few days before.
“This year was the biggest year yet for the Shivaree with an estimated 2,500 people in attendance,” said Brenda Archambo, Sturgeon for Tomorrow president. “We want to express our gratitude to our sponsors and volunteers who have made the Shivaree wildly successful.”