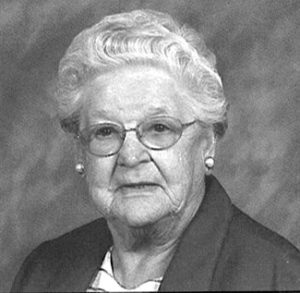 Beverly Jean Swanson was born in Wyandotte September 23, 1930 to the late Harry and Esther (Elstrom) Swanson. Beverly graduated from Western Michigan University in 1952 and finished her graduate studies at MacMurray College in Jacksonville, Illinois. On June 27, 1953 she married Herman Cordes Jr.   He preceded her in death March 6, 1995. She retired from Hillman Community Schools in 1985 and was the Montmorency Township clerk for 14 years. Bev was a member of St. John Lutheran Church, Royston, its Ladies Aide, Veterans of Foreign Wars Ladies Auxiliary and Hillman Senior Citizens.

Mrs. Cordes was preceded in death by a grandson; a great-granddaughter; and a brother-in-law, Ronald Hurd.

Visitation was Monday, April 18 at St. John Lutheran Church in Royston and continued Tuesday until the time of the funeral service with the Rev. Jason Mandley officiating. Arrangements are being handled by the Bannan Funeral Home in Hillman. Interment was at St. John Cemetery.

Memorials may be made to St. John Early Childhood Center.