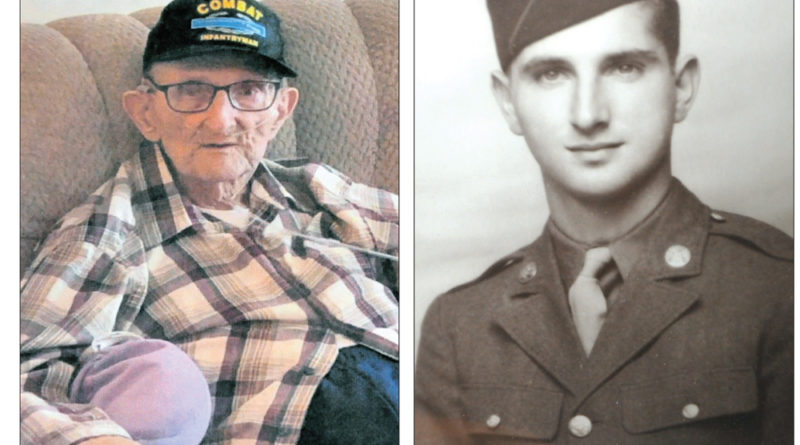 Another hero is gone. Carlyle “Carl” Blosdale was part of the Greatest Generation who served in the European Theater of Operation in World War II.
Time and age caught up with the Rogers City veteran, March 20. He was a man who not only lived the American dream, but died a wealthy man in friendship at Hilltop Manor, the subsidized apartment complex for seniors and those with disabilities across from the Rogers City High School.
His obituary last week stated that he died at home. Truer words could not have been printed. He passed at his Hilltop home, with his Hilltop family keeping vigil until the end.
It was Carl’s wish.
“We all loved him so much,” said Hilltop resident Jackie Poch, who lived right across the hallway from him. “He was a great guy, and we are going to miss him.”
On March 24, a memorial service was conducted in Hilltop’s Sally Goupell community room. It could not have been in a more appropriate place, since Sally is the one who talked Carl into moving there.
The Rev. David Rogers of Rogers City Baptist Church officiated the somber service. “I think we are here against his wishes, because he did not want a service.” Rogers continued, “This was not for Carl, this was for us.”
One important wish was fulfilled. He did not want to be taken to a hospital or a home.
“He was promised that he could stay in his room, when he realized the time was getting close,” said Rogers. “He wanted to pass away here and I want to thank each of you who had a part in comforting him through that (speaking to the Hilltop residents sitting together on one side of the room). He wanted to be here so you could pop in and see him.” That would make his day.
“Carl was a lover of people,” said Rogers. “It seems that when people get older, their world shrinks and gets a little smaller, but, with Carl, it got bigger. He had the ability to endear himself to other people.” And later in life, fine tuned it.
Rogers also called Carl loyal. “If you wanted to get Carl misty-eyed, just talk about patriotism, talk about our country.”
“What a tremendous example he left for us,” said Rogers.
Carl’s service to the country did not start with a uniform, but with a wrench at the Willow Run Airport assembly helping building liberator planes at a young age. Eventually, he decided to enlist because he knew he was going to get drafted.
He was in the 71st Infantry that provided support to Gen. George S. Patton’s troops during the brutal Battle of the Bulge.
“As he put it, (Carl) walked across one side of Europe to the other,” said nephew Robert Durham. “His unit liberated town after town. One of the final things he did was to liberate a concentration camp in Austria. He said it was as gruesome as you have heard. He was really struck as to how awful it was.”
Rogers spoke at the service of how God protected Carl in the war.
One of the last stories Carl told his nephew was about the time he rode on a tank crossing the Rhein River on a pontoon bridge.
“He was certain that tank was going to go under, because it would rock on that bridge,” said Durham. “With the Battle of the Bulge being in the wintertime, he was outdoors all of the time, in the dead of winter, with one of the worst winters for snow that he had ever seen in his life.”
Soldiers would sleep on the hood of a tank, because they always kept a gas motor running. “It threw off a little heat,” added Durham. “My son works at a large dairy farm and he will take two pair of gloves to work. He will put one inside his jacket to keep them dry. That’s what my uncle taught him to do. He always had two pair of socks. One that he would put on and another he would have drying out and keeping warm.”
After the war, he met his wife Ruth, who also served in the war in North Africa and France, working in an office. The two met at a dance in Quincy.
Both used the GI Bill of Rights to attended Michigan State College and earned teaching certificates, but when the Korean Conflict started, he was called again to serve.
“He never did go overseas,” said Durham. “Because he had a college degree, he went in as a lieutenant, on his way to becoming a colonel.”
Carl and Ruth were married for 65 years when she passed away in 2012. That set into motion his move from a cabin along Evergreen Highway, 10 miles north of Rogers City, into town.
“By the grace of God, he came across Sally in the fall of 2013,” said Durham. “He had the ability to change and adapt. He rearranged his entire life here (at Hilltop).”
In 2016, folks at Hilltop helped make arrangements so Carl could have a seat on Honor Flight and see the World War II Memorial on the National Mall.
“He was a good person, but he sought out the company of other people,” said Durham. “The more he stayed here, the more he understood what a great place this is. People here are fantastic.”
The famous quote from the 1946 classic, “It’s a Wonderful Life,” is “no man is a failure who has friends.” If that is the case, Carl’s life was a great success story.
A wonderful life remembered.