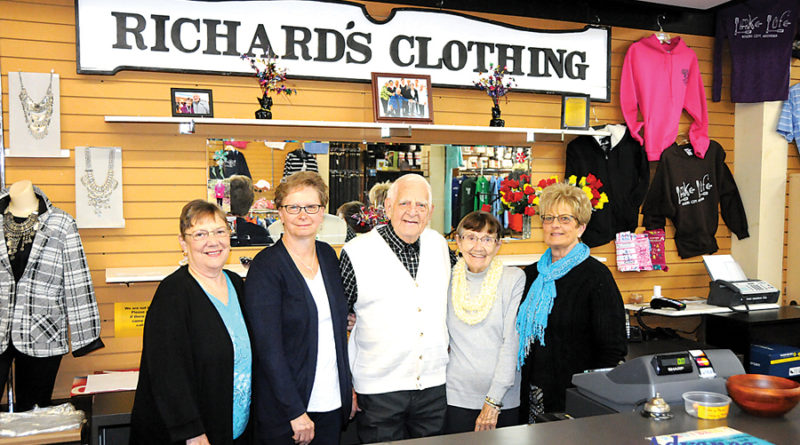 by Richard Lamb–Advance Editor
Anyone who ever shopped at Richard’s Clothing knows that Richard Vogelheim is always willing to deal. In his 60 years as owner of an anchor store in downtown Rogers City, the gregarious clothier had the goal of pleasing the customer. Those days will wind to an end as Vogelheim plans to liquidate his store beginning this week and lasting over the next few months, or until the inventory is sold.
“It’s not because I don’t have the merchandise. Very few people are coming in asking for something that I don’t have.  I’m loaded with inventory,” Vogelheim said.
He stressed that the impending closing of the store has nothing to do with his age or health–he turns 90 this year–but has everything to do with sales. His health is fine and he has the robust energy of people half his age. He walks at a brisk-pace, has a sharp wit and is not content when idle.
“I want people to know that the reason I am going out of business has nothing to do with my age or health. That is not the reason,” Vogelheim said.
Customers are accustomed to getting a warm greeting and helpful service in addition to being able to have a great selection of merchandise. But competition from big-box stores and online merchants have cut into sales for the local merchant.

VOGELHEIM’S CAREER in the clothing industry began at an early age. He worked for Aaron Levanthal while in high school in the same building he now owns.
The tall stacks of merchandise in Levanthal’s store is legendary. Finding merchandise was a nightmare, Vogelheim said. The building was built in the 1880s and first operated as a general store and later as a saloon before Levanthal turned it into a clothing store in the 1930s. The Odd Fellows Lodge used the upstairs for meetings before disbanding. Now it is a storage area for Richard’s Clothing.
“Oh no! You walked in there and everything went to the ceiling and the basement was the same way. It had big wide boards with everything going up to the ceiling,” he said.
Upon returning home for holiday break after his first fall of college, he got a call from Levanthal, but Vogelheim initially turned down the offer for a job.
“I always helped him out in high school. His wife was Sadie and his sister was Tilly. So he called me when I came home for Christmas from my first year in college and asked me to come work. I told him I’m not working for you anymore and I hung up,” Vogelheim remembered.
A few moments later, Levanthal called back wondering why Richard refused the job.
“I told him I was embarrassed. I worked for you all this time, but I always had to take the merchandise to Tilly to ring it up because you didn’t trust me with the register. I want to ring up my own sales. He said if you come back I will let you ring up your own sales,” Vogelheim said.
He attended Rogers City High School and later graduated from St. Jerome in Kitchener, Ontario. From there he attended St. Edwards University in Austin, Texas before graduating from the University of Arizona.
Before returning to Rogers City Vogelheim worked for J.C. Penney, having a chance to meet Mr. Penney himself.
“They were opening a brand new store and made me an offer in Mishawaka, Indiana. J.C. himself came up and he cut the ribbon. I had a chance to shake hands with him,” Vogelheim said.

THE OPPORTUNITY to come home came after the death of Levanthal.
“In the meantime, he opened up a store in Cheboygan. When coming back from his store in Cheboygan he had a head-on collision and was killed. My brother Kenny called me and said this is coming up for bids. He knew I had some experience and said we should take over the closing of the store,” Vogelheim said.
The brothers liquidated the stores in Cheboygan and Rogers City. Kenny was in other businesses and had no interest in continuing in the clothing business but Richard did.
The store prospered and Vogelheim expanded the store to include more merchandise.
“I wanted to add a shoe department and I couldn’t see any room up front. So I thought we would add to the back for shoes, which worked for a long time,” he said.
But as times change styles change, especially in the casual way people dress.
“Everybody is in the sneaker business, athletic shoes. Go anywhere you want and you will see it. Everybody is dressing down,” Vogelheim said.
Distributors have made it difficult on the smaller merchant, he said, demanding sales in larger volumes. That happened with New Balance shoes that claimed to be outselling Nike at the time. When Vogelheim placed an order for 18 pairs of shoes, the distributor refused the sale, saying Richard’s Clothing needed to order more. Other major brands have the same type of policies with smaller merchants, he said.
“It wasn’t my credit or anything else. But see what happens today, they don’t want to bother with the little guy,” he said.
Competing with national chains that offer free shipping with prices below his wholesale cost either online or in catalogs makes competition impossible, he said.
“I’ve tried to operate between 35 and 40 percent at the most because some of these ladies tickets that come in, you should see the prices that are on the tickets,” he said. “You wouldn’t believe what they expect you to get. It is ridiculous,” he said.
Because of his love for conversation, he will miss the day-to-day contact with people in the store. But his goodwill goes beyond those that shop at Richard’s Clothing.
HE IS KNOWN to drop off boxes of candy, cakes or baked goods to his friends. His visits to friends in long-term care spark smiles from residents and staff with his infectious positive attitude. On a recent trip to a local facility his rendition of “You Are My Sunshine,” brought smiles to everyone within earshot of his harmonica performance.
“Most of them were sleeping, but I told them I had one song that goes back a long ways. So I played it and they all loved it. Some never did wake up but that is how it goes,” Vogelheim said. “I love the people and I love the business and I want to be active, so it is still worth it to me. I can’t stand being idle. I have to be doing something. I like people,” he said.
Richard realizes that the business has changed over the years. People will drive further for a bargain or enjoy the convenience of having products delivered to their door.
“I don’t blame them, if they want to stretch that paycheck with what is going on. You almost have to have two jobs today because everything is so expensive,” Richard explained.
The trend to shop at big box stores is a trend that is hard to fight. People want the convenience of having a local merchant, but will often take their major purchases out of town, either via the Internet or a trip to an out-of-town location. This happens regardless of the great service customers get at Richard’s Clothing.
“My employees are great. I have told them I don’t want anybody walking out that door that is not happy,” he said.
Shirley Mulka, Trudy Orr and Rose Schalk have all worked for him for at least 30 years and Richard and his wife Janet are proud of them.
Richard and Janet have been married 64 years and have eight children.
“I’ve loved every minute of the 60 years in business. Sixty years is a long time to last,” he said. “I don’t have any regrets at all but I feel bad for the community.”