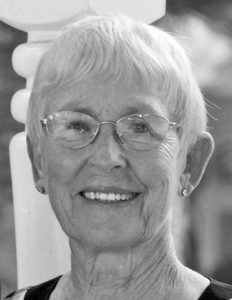 Therese was born and raised in Rogers City, September 28, 1922, the youngest child of George and Alma (Dramburg) Grambau and a sibling to Herman, Harry, George, Grace (King) and her twin Ernestine (Wilson) Grambau. She was born and grew up in the Grambau home on the corner of South Third Street and Woodward Avenue in Rogers City.

She spoke fondly of the house, her mother’s flower and vegetable gardens, and the times she shared there with her family and friends.

Although she met her future husband, John Glazer Wing, son of Harry C. and Theresa “Babe” Wing, at Rogers City High School, where Therese was a cheerleader and John a football player, they did not date until years later in Detroit after World War II.

In 1947 they were married in Detroit. Last year they celebrated their 71st anniversary; this June 28 would have been their 72nd.

Therese and John had two children, Susan Laura and Steven John, and two grandchildren, Taylor Benjamin and Evelyn Therese. In 1954, she and John moved with their children to San Diego, California.

Every other year the family drove to Rogers City to visit family, taking a different route each time so that they were able to visit much of the United States, going as far as the 1964 World’s Fair in New York.

Therese loved where she lived and where she came from. Like her mother, she tended her gardens and made her home lovely and welcoming.

She and John also loved traveling the world and visited over 100 countries, collecting

She was a loving and generous wife, mother, grandmother, aunt, cousin and friend.

She loved hearing from relatives and friends, writing letters and notes throughout the year.

She was gracious to all she met and is remembered for her enthusiasm, energy and kindness.

Therese is survived by her loving husband, John; her children, Susan (Jeff) and Steven (Joyce); and her grandchildren, Taylor and Evelyn (Marcus).

In lieu of flowers, the family requests that donations in Therese’s name be made to hospice organizations.