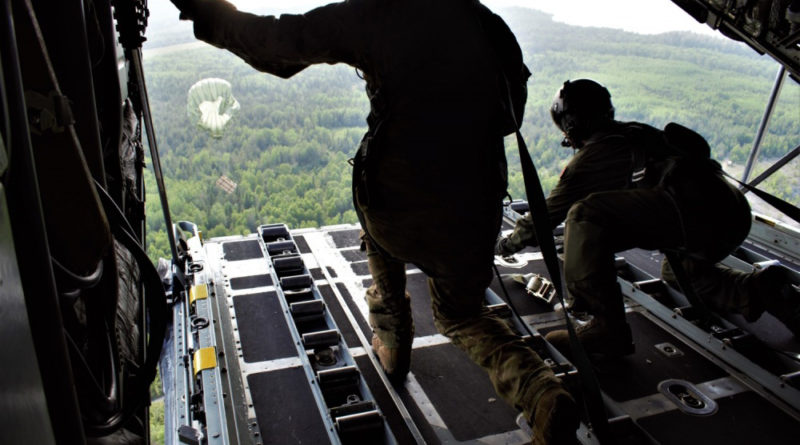 ENS is a robust military readiness event hosted annually at Michigan National Guard facilities that in addition to Alpena CRTC, includes Camp Grayling Joint Maneuver Training Center, Grayling Aerial Gunnery Range, the Carmeuse Lime & Stone Calcite Quarry in Rogers City, and the former site of K.I. Sawyer Air Force Base in the Upper Peninsula. With approximately 5,700 participating soldiers, airmen, sailors, and marines, ENS is one of the largest reserve component exercises supported by the U.S. Department of Defense. Its mission is to maximize the full-spectrum combat readiness of National Guard units through realistic, cost-effective joint fires training in an adaptable environment, with an emphasis on cooperation between joint and coalition forces.
“This year, ENS brings the familiar energy and excitement of combined live fire training in the U.S. military,” said Col. John Miner, commander, Alpena CRTC. “Department of Defense components and coalition partners will face some new and challenging training that only an exercise like Northern Strike can offer. This exercise is about synchronized and integrated training – our component players and NATO allies will be tested.”
Alpena CRTC will be the focal point of air operations during the exercise. The ENS live-fire exercise involves small arms, mortars, artillery, and aerial munitions at the Camp Grayling range complex, along with simulated-fire exercises at the Carmeuse Lime & Stone Calcite Quarry in Rogers City and other locations. Close air support is the primary air mission, with other secondary missions including air interdiction, airlift and airdrop, combat search and rescue, air-to-air refueling, intelligence and surveillance.
Miner points out that this year, two new exercise facets being staged from Alpena CRTC include the launch and recovery of an MQ-9 Reaper, and invigorated emphasis on aeromedical evacuation proficiency.
“MQ-9s have participated in the exercise before, but we’ve never launched, flown and recovered them from the CRTC – this brings another level to the complexity and effectiveness of this exercise,” said Miner. “Also important this year is the added layer brought by the medical community. The scope of training, from injury to full-on delivery for treatment, will test our medical resources and readiness in the context of a major live-fire exercise on a scale that’s never been seen before.”
ENS also presents a unique opportunity to showcase collaboration between the Michigan National Guard and NATO allies and partner nations, including Latvia. For 26 years, the Michigan National Guard has enjoyed a rich partnership with the National Armed Forces of Latvia under the National Guard Bureau’s State Partnership Program (SPP). Latvian personnel will work side-by-side with Michigan National Guard soldiers and airmen during air and ground combat capability drills at Alpena. Collaboration between Latvian military personnel and airmen from Alpena CRTC has been particularly strong in the fields of fire protection, air traffic control and airfield management, public affairs, and Joint Terminal Attack Control (JTAC) – a capability that allows the direction of combat aircraft engaged in close air support and other air operations from a forward position.
“Michigan’s partnership with the National Armed Forces of Latvia was the first formed under the SPP in 1993,” said Lt. Col. Brook Sweitzer, bilateral affairs officer for the Michigan National Guard. “Since then, the relationship has grown in size and scope over the decades, forging trust and ties beyond what anyone could have originally expected. Exercise Northern Strike is a key event in this partnership because it puts American and Latvian service members side-by-side in realistic military scenarios that test the skills, interoperability, and mutual experience they’ve built together over many years.”
This is the eighth year that Alpena CRTC has been a host for ENS. The influx of visiting units provides a perennial boost to the local economy, with an estimated $2 million in added revenue each year. Miner heartily acknowledges the role that local community support plays in making a large-scale event like ENS a success.
“Without community support, this training opportunity would not be possible,” he said. “We realize we can sometimes inconvenience the public, but the training our airmen receive at Alpena saves lives and creates effective war fighters in an environment that would not be possible any other way.”