Eric Paul Warren, 43, of Cheboygan died in Mio August 17, 2019. The cause of Eric’s death was anaphylaxis, brought on by insect stings. This occurred while doing what he really loved; four-wheeling and being out in nature with his longtime friends. Eric was a good friend of many. 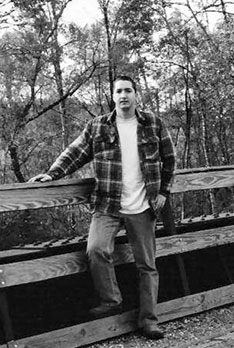 A 1994 graduate of Howell High School in Howell, Eric attended Michigan Career and Technical Institute in Plainwell, accepting a position with Moeller Aero-Space Manufacturing upon his graduation. He worked for Moeller for 21 years and was considered a valuable and loyal employee making lasting friendships.

Eric loved the outdoors.  He enjoyed camping, being in the woods, teaching his “city” cousins the “ropes” and showing them around the northern part of the state. He enjoyed electronic stuff. He went to the gun ranges often. Shooting was a passion and he was a good shot.  He was also a great gamer

– making it past level 99 in World of War Craft.

Eric leaves his beloved mother, Janis E. Blohm of Onaway.  He was the loved nephew of Lyn (Greg) Stukalo of Chicago, Illinois and Peggy (Glenn) Walters of Onaway; the fond cousin of Katrina (Rick), Olivia and Ian Walters, Amy Stukalo, and Greg and Nick Stukalo-Stolte; as well as the lifelong friend of Chris Rockhey of Howell. Eric was preceded in death by his father, Grant E. Warren of Cheboygan; and his uncle, Greg Blohm of Onaway.

The loss of Eric will leave a void in our lives; he will be truly missed.

In lieu of flowers, his mother’s wishes are for contributions in Eric’s name to the Forest-Waverly Fire Association, c/o Chris Larson, 6275 Brenda Lane, Onaway, MI 49765.