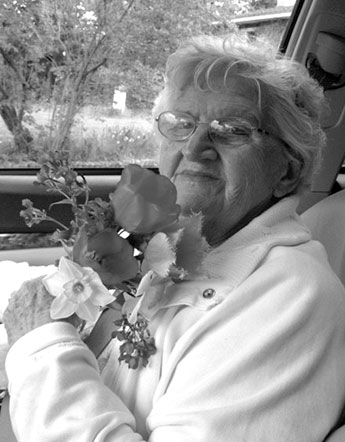 Alice was born in Rogers City July 24, 1927. She was the third daughter of Alexander and Mary Krawczak.

Alice learned a great deal about how to run a household and raise a family from her mother. She was very active in her community growing up and worked hard and played hard with her brothers and sisters, cousins and friends.

Alice met the love of her life in 1948 and began a whirlwind courtship with Harry Darga from Posen.
Harry preceded her in death five years ago. Alice and Harry were married, at St. Ignatius Catholic Church in Rogers City. They were married for 65 years. They settled in Alpena where Alice was busy raising the first three of their children and where Harry became the bookkeeper for the Sherwin Williams Paint store.
In 1955, Harry took a manager position in Ann Arbor. There, Alice and Harry added two more children to the family.
It was in Ann Arbor where Alice began a lifetime of being very active in all the things a great mom might do. She was active in St. Thomas Church programs, but it was her cooking, baking and canning that brought her praise from everyone who had the pleasure of enjoying her dishes.

Alice’s bread was legendary. Alice and Harry said the rosary every day of their married lives.
In 1973, an opportunity came up for the family to return to northern Michigan and Alice and Harry and family relocated to
Grand Lake where they had their home on the lake for 40 years. Alice and Harry loved to travel. They took several vacations to Europe, Alaska, Hawaii, western U.S, Canada, Mexico, out East and down South. Alice and Harry actually visited every state in the nation. Alice and Harry spent many winters in Gulf Shores, Alabama and more than 20 winters at their home in Port Richey, Florida. They loved the sunshine and shared it with their family and many friends.

Alice was the last of her immediate family to transition leaving literally hundreds of nieces, nephews, great-nieces and
great-nephews and cousins. Brothers and sisters Anne, Louis, Albin, Leonard, Joseph, Gertrude, Sophie, Chester and Eleanor preceded her in death.

Visitation was at St. Casimir Catholic Church Tuesday, September 3, with a rosary that morning and visitation until time of her Mass with the Rev. Arthur Duchnowicz officiating.

Memorials may be made to the St. Casimir Burial Fund.
Arrangements are in care of the Beck Funeral Home.
Online condolences may be addressed through www.beckfuneralhome.org.