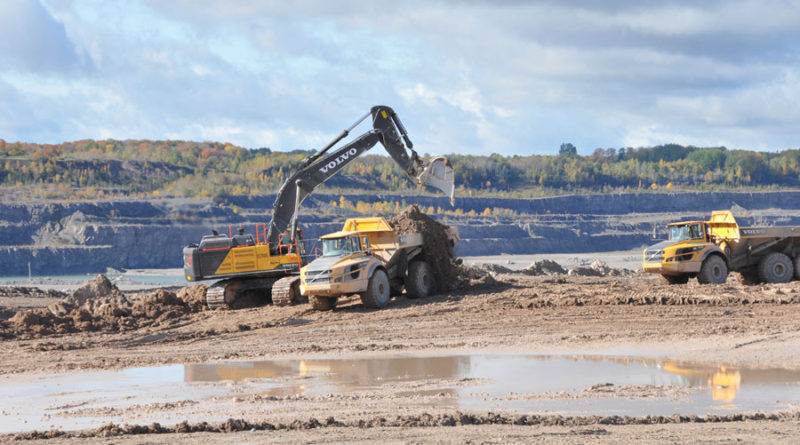 Get used to seeing Turner Mining Group (TMG) trucks in Rogers City for the foreseeable future.

The Indiana-based company was hired by Carmeuse Lime & Stone to strip the overburden from a section of the quarry known as the north five area.

This week, there was a crew of 14 to 15 on site, but it has been as many as 50 in the area during the high point of the season.

TMG is here on a three-year contract that started earlier this year.

“We are up there for three years in Rogers City and we’ve been loving it thus far,” according to Thomas Haun, chief operating officer.

Crews have been renting homes, motel rooms as well as Airbnb facilities in the Rogers City area for most of 2019.

In terms of the economic impact, “it’s 50 people living in the community, contributing just like any other citizens. We are lucky we get to have that impact on communities all over the country.

“It’s wherever we see the demand from our clients to increase their capacity or do more mining.”

This is TMG’s first major contract with Carmeuse, said Haun.

Last year, another contractor removed the trees in this section of the quarry ahead of TMG bringing in their heavy equipment.

“It is to remove all the clay, sand and cap rock above the high-calcium limestone,” said William de Changy, Calcite site operations manager.

de Changy said TMG was hired because the firm, that does work across the country, has the equipment to complete the task.

“The rigid frame of the loaders and trucks doesn’t work well on that terrain,” said quarry manager Scott Grulke. “Where the excavator and the articulate trucks are made for it.”

In the current area of the quarry, approximately 20 feet of overburden needs to be removed. Grulke said the depth of the limestone deposit varies in the quarry.

The overburden is transported to an area of the quarry that already has been mined as specified by Carmeuse.

TMG plans to continue working right through the winter months.

“Obviously, anywhere in northern Michigan tends to be seasonal but we started working in the dead of winter earlier this year,” said Haun. “We will always have some kind of team at Calcite.”

“They are doing a great job,” said de Changy.

“They are very respectful and professional with what they do,” added Grulke.

“The Carmeuse guys are really doing a great job this year,” said de Changy. “It’s been a challenging year.” Carmeuse crews have been working 24/7.