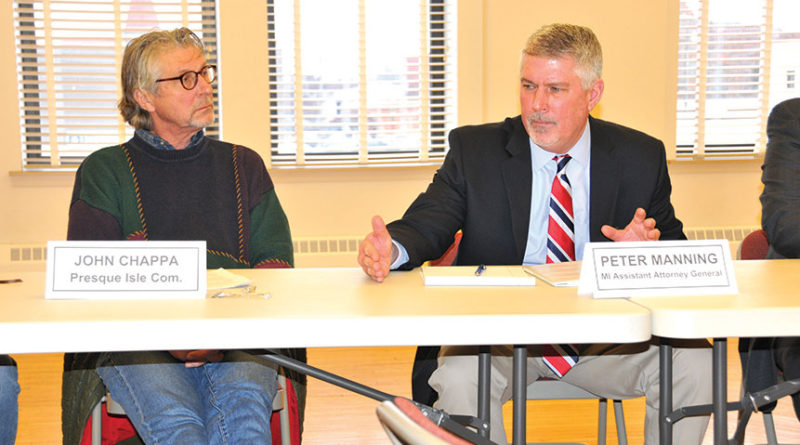 Community leaders and concerned citizens from northeast Michigan came together to learn more about what can be done to protect Great Lakes’ water resources, particularly against a leak or a spill from Enbridge I

nc.’s Line 5 oil and natural gas pipeline under the Straits of Mackinac.

Manning is the chief of the environment, natural resources and agriculture division, who has been with the office for 25 years, serving under five attorney generals.

Manning focused the first part of his presentation on the accidental anchor strike of a large, laker in April 2018 where the anchor became loose and was dragged.

“What the office is focused on for legal action is the anchor-strike possibility,” said Manning. “It is well-known that anchor strikes are a major risk to this underwater infrastructure.”

In the wake of the accident, Enbridge talked about different measures to prevent another such incident.

Estimates of an oil spill in the Straits of Mackinac from a study by Michigan Technological University and the University of Michigan have been placed at $1.78 billion.

“Enbridge does have various things on the line that should create some redundancies. There are shutoff valves on each end. Those should automatically deploy if the pressure drops,” said Manning. “They made some assumptions that these measures would work.”

In 2010, Enbridge’s cleanup of the spill into the Kalamazoo River from pipeline 6B has been handled by the company. “They are at $2 billion right now and a river is a much more contained environment than the Straits…you never know where the waves or currents are going to go.”

Manning said the Line 5 pipeline carries about 540,000 barrels a day on average with 80 percent being light crude and is delivered to refineries in the Detroit and Toledo areas, while 20 percent is natural gas liquids.

Additionally, according to the Enbridge.com website, Line 5 also delivers 65 percent of the propane that heats Upper Peninsula homes.

“A worst-case spill has been estimated to release 2.5 million gallons, which is about twice the size of the oil spill that happened in Marshall, Michigan,” stated Roger Gauthier, chairman of the Cheboygan County Democratic Party and founder of the group Straits of Mackinac Alliance.

On Dec. 19, 2018, Enbridge announced that it had reached an agreement with the Mackinac Straits Corridor Authority on the future of Enbridge’s Line 5 light oil and natural gas liquids pipeline at the Straits of Mackinac to constructing a new pipeline in a secured tunnel, bored beneath the lakebed.

Construction of Enbridge’s Great Lakes’ tunnel advanced in November 2019 with the recent completion of sediment and rock sampling at the Straits of Mackinac, a key engineering component needed for the final design of the tunnel, the website states. The sampling program was a major part of Enbridge’s $40 million investment in the project in 2019.

The specialized deep water drilling vessel, Highland Eagle, completed the last of the bedrock borings in the deep-water areas at the Straits. Rock and sediment samples were collected from a total of 27 locations including onshore, nearshore and deepwater locations.

Geologists will study the rock samples collected. Results of the study will be used to guide the design of the tunnel, as well as the tunnel boring machine, that will be custom-built to suit the characteristics of geology in the Straits.

Manning commented that most of the jobs created from the project will be temporary during the construction. He also refutes the notion that the tunnel will be constructed in five years, or by the year 2024.

“Enbridge has to get, and this is from an Enbridge document, 19 state and federal permits,” said Manning. “Most of these statutes allow third-pa

rty appeals.” Additionally, Michigan tribes have signaled they will file suit based on treaty rights.

In the meantime, the attorney general’s office has filed a lawsuit against Enbridge alleging that Line 5 constitutes a public nuisance; violates the Public Trust Doctrine and violates the Michigan Environmental Act. “It’s the wrong thing in the wrong place,” said Manning.

A conference will be conducted in Ingham County Circuit Court, Jan. 31.