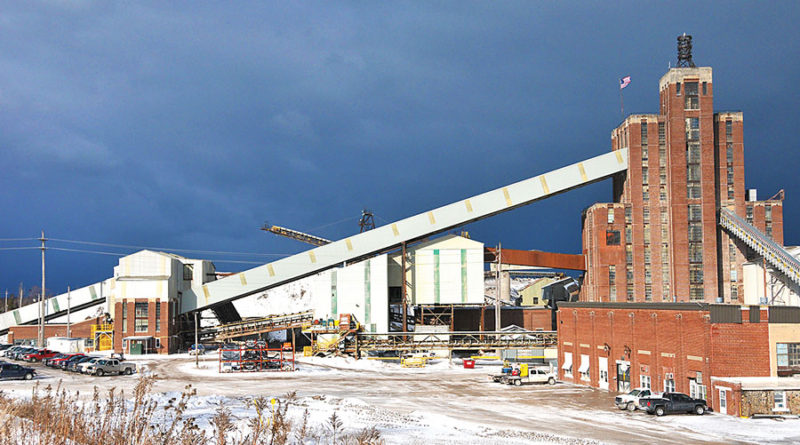 “We were up by 440,000, nearly a half million tons, compared to 2018,” said William de Changy, Calcite site operations manager. “The major increase was on the aggregate side.”

The company’s goal was to ship more cap rock stone to the aggregate markets.

“That’s one of the reasons why we had the big increase, because of the dense-grade market increase,” said de Changy. The cap stone is the layer above the high-calcium limestone in the quarry.

One of the bigger customers is in Bay City where a windmill firm is involved in a project and needs the cap rock to provide access roads. It is shipped in by boat through Saginaw Bay to its final destination.

While the Anderson was the last, it was April 12, 2019, the first boat made its arrival. It was the Great Lakes Trader and tug, Joyce L. Van Enkevort, finding its way to the south dock at 5:40 p.m. on a very chilly, mid-April evening.

“It was a great year,” said de Changy. “Maybe next year will be better.” The forecast is to equal the numbers achieved in 2019.

According to John Abbitt, area operations manager, the 2020 budget will allow for the purchase of a Caterpillar D10 bulldozer and a 150-ton Caterpillar 785 mining truck.

“We will be ordering them this month. It will probably be here about mid-season,” said Abbitt.

With the winter schedule in full swing, De Chang

“We did not force anybody to be on layoff,” said de Changy. “About 95 people are working, but we also have contractors working on various projects and replacing equipment.

“We don’t have any big, big project this winter.”

“There are no major rebuilds or reconstructions,” added Abbitt.

The company employs up to 2,000 employees throughout 28 production facilities in the eastern United States and Canada. Its North American operations headquarters are in Pittsburgh, Pennsylvania.