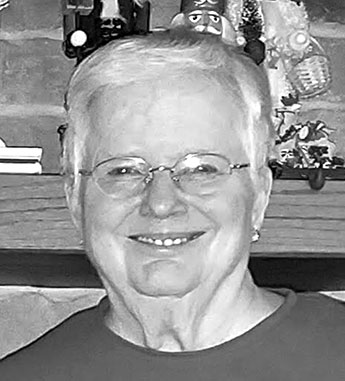 Born in Dallas, Texas February 20, 1940, Jean was the daughter of Fredrick and Marguerite (Gross) Wood.  She fulfilled her dream of becoming a wife and mother when she married David “Dave” Cooley April 2, 1960 in Fenton. They were blessed with 48 years of marriage at the time of Dave’s death in 2008.

Jean’s first trip to Black Lake was in 1960 when Dave took her to the Cooley family cottage for vacation.  She fell in love with area and returned often. In 1994 she and Dave realized their dream to live at Black Lake when they bought a home and moved north from Mason. Jean volunteered at the hospital in Cheboygan and was a member of TOPS and Al-Anon.

Surviving Jean are her daughters, Ann (Doug) Miller of Brownsburg, Indiana and Lynda (John) Warner of Canton; four grandchildren, Claire (Shane) Brenton, Peter, Graham and Nathan; as well as brothers, George (Marsha) Wood of Ohio, Bill (Susan) Wood and Charles (Kelly) Wood, both of North Carolina, and John (Janet) Wood of Georgia; a sister, Marguerite “Margie” Dameron of Onaway; and many nieces and nephews. Jean was preceded in death by her parents; husband, Dave; and two brothers, Fred and Jim.

A great friend and a wonderful neighbor, Jean

lived a life of love.

She leaves a trail of memories with her handmade afghans, homemade Christmas cookies and many neighborly deeds. Her quick wit, her sense of humor and her zest for life will be fondly remembered.  With her upbeat attitude and cheerful disposition, it was Jean’s wish for a celebration following her death.

A party to honor Jean’s life and her memory will be held in the summer of 2020.

Donations in memory of Margaret Jean Cooley should be made to Angela Hospice, 14100 Newburgh Rd., Livonia, MI 48154.