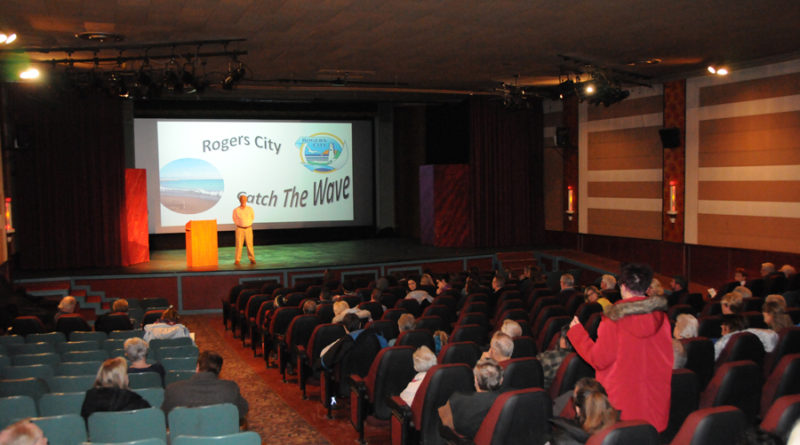 “Let’s work together and help Rogers City be all it can be,” was the message given to a group of citizens looking to make a difference in Rogers City.

Rogers City mayor Scott McLennan urged the community to get behind the Main Street program offered by the Michigan Economic Development Corporation (MEDC) designed to spark small towns. Plans are for the city to apply for the designation during the next round of selection, but some groundwork needs to be done before that happens.

“It is now up to the citizens of Rogers City. I am asking you to step forward and let your voices be heard in any way, shape or form that you can think of. Let it be known that you want an improved Rogers City, because we can do it. The tools are there for the asking and we just have to ask,” McLennan said at the close of his presentation Friday.

According to the MEDC “the Michigan Main Street program aims to create communities distinguished by a sense of place. The rationale is based on a range of studies that show investing in creating a sense of place is an integral part of developing vibrant city centers and downtowns, thereby making the state economically stronger and culturally diverse.”

In a town hall presentation McLennan presented the basis for the Main Street program and fielded several questions from around 80 people at the Rogers City Theater.

McLennan said the discussion would have an impact on Rogers City for the next 50 or 100 years. He talked about the changes the city has endured for the past 149 years of its existence and how change is always a part of the picture.

“Rogers City is changing and has been changing for many, many years. Back in the 1940s and 1950s, the baby boom era, Rogers City was growing, expanding and prosperous. It was doing very well,” McLennan said. “And later when I grew up, it was still doing well and I took that all for granted.”

THE COMMUNITY was safe and had ample resources, he said. Since 1970, McLennan said, the population has steadily decreased from around 4,700 to around 2,700 today. Projections he has seen predict another loss of 800 people in the next few years. He stressed the need to start now on plans to encourage revitalization.

Other strategies have been tried over the years, but were eventually put on the shelf. That cannot happen anymore, he said.

One plan that yielded questionable results came with Urban Renewal billed in 1968 by the Rogers City City Council as “Rogers City’s plan to meet the challenges of the future.” Drawings of the future of the city never panned out to the reality of the rebuild. Businesses were encouraged to tear down their buildings and be part of the new look planned for the downtown area. The teardown went fine, he said, but the benefits have been questioned over the years. The Main Street program is nothing like failed plans of the past.

Barriers to overcome to achieve success of the program include population decline, lack of housing, relative remote location and lack of brand awareness.

The program will focus on attracting more tourism; workplace improvement and recruitment; encouraging new housing and sense of place; marketing the community; and implementing successful partnerships with citizens groups and volunteers.

HIS PRESENTATION talked about the positive resources the area has including the intersection of major highways, the deepwater port of Calcite, a beautiful 120-boat marina, pristine lake front, relatively low housing costs, abundance of city-owned lake frontage and a municipal airport.

McLennan told about other Michigan cities that have turned things around through the Main Street program. One example was Boyne City, where he visited to get ideas. One idea McLennan borrowed turned into TEAM Rogers City, modeled after a Boyne City meeting.

“The Rogers City Downtown Development Authority (DDA) has said they are behind it. So, the DDA has committed $20,000 for the next five years. The vote isn’t official but I know they are going to do that,” McLennan said.

The city has the ability to levy $50,000 in a millage that does not take a vote of the people, but takes the support of the people, McLennan said. The idea of the levy has not been presented to the City Council yet. It figures out to about .75 of a mill, costing about $30 per year for a property valued at $100,000. Other funding could come from donations and fundraisers. A donation for $10,000 for each of the five years has already been offered. McLennan said the budget for a manager’s office could be around $90,000 per year.

Having a person certified in the Main Street program is the first step. McLennan and Kim Margherio are certified. Next comes an application process driven by the community. If the community shows support, an application will be submitted likely in the fall to the MEDC.

“They will look at how engaged is your community, how bad do you want this? It is a competitive thing with a lot of state dollars. A community in our area applied, but didn’t get selected because their community wasn’t behind it,” McLennan cautioned.

WHERE OTHER communities have paid staff to market the area, there is no paid staff promoting Rogers City. The Main Street program would address this.

“We need to have the Main Street program. We need a staff person that is working on bringing these resources to Rogers City and we need the expertise of the state,” McLennan said.

During the questions’ period, Beach Hall, who served 12 years as mayor, said one of his disappointments was when the city didn’t gain Main Street a few years ago.

“We got all the way out to figuring out how to pay for it and for a variety of reasons we are a lot closer to being able to pay for it today than we were then. I just want to second Scott’s comments about all the advantages of becoming a Main Street city. Honestly, we are 10 or 12 years behind the curve and we need somebody to help us catch up,” Hall said.

Kristyn Blackmer, now working with the MEDC and a former Miss Rogers City, praised the Main Street program in her comments during the audience question portion.

“Main Street is a really great program. I would love to see Rogers City utilize the funding that MEDC has for these communities. I have seen Cheboygan and Alpena benefit from it. Now it is Rogers City’s turn,” Blackmer said.

Coming together for a cause has been done before, as evidenced by the Kickstarter fundraising campaign that raised more than $117,000 from 558 people to do renovations to the Rogers City Theater including purchasing a digital projector, sound system and new seating.

“It shows that we can do things. We can do things outside of the box and we need to continue doing this,” said Rachel Goodstein, the mastermind of the theater fundraising campaign. “We have proven we can get this done. Now we need to take this to a bigger scale.”

OTHER QUESTIONS focused on how to find a manager’s candidate, funding the position and long-term plans.

McLennan seemed encouraged by the attendance and participation at the meeting, as he explained.

“I was pleased with the interaction from the group that was here this evening. I think that we have a lot of things to think about if we are looking at improving our community. The tools are there. As a grassroots movement, everybody has to become involved. Any of the seats that were empty tonight, I hope they are filled because everyone will benefit from a Main Street program,” McLennan said

For more information or to volunteer to help on a Main Street committee, contact City Hall. McLennan also encouraged people to come to City Council meetings to voice their opinion on Main Street or other city matters.