Karan Mac Pregitzer, aka “Mr. P,” 90, passed away in his favorite spot at home, looking out at Black Lake, with his family, wife Caroline (Bissell), daughters Linda Pregitzer, Renee (Pregitzer) Wyatt, and Olinda Sandoval, son-in-law, Tony Wyatt, and grandson, Anthony Wyatt by his side. He was born in Onaway September 1, 1929. The son of George W. and Ethel G. “Grace” (Bahel) Pregitzer, he was the last of a sprawling family of nine children. 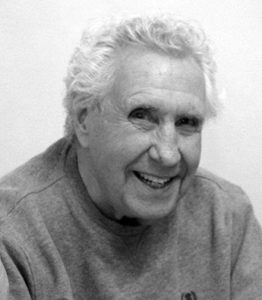 An icon in the community, Karan was a former businessman and co-founder of the A&W Drive Inn and Charcoal Room (now known as the Woodwinds) with his best friend Jerry Stone. He was the band director, speech teacher, and debate coach at Onaway schools, as well as a local historian of Onaway and Black Lake. He was well-known, well-respected and well-loved by his community. Karan attended school in Onaway and was greatly influenced by his band director, Mr. Carl McClutchey, who nurtured his love of music.  An excellent musician, Karan graduated in 1947 and enlisted in the Navy along with locals Bob Kenrick, Andy Pauly and William Morgan. He attended the U.S. Naval School of Music in Washington, D.C. and then served three years in Japan playing in a Navy Unit Band. During the Korean War he was called back and served in the European Theater for two years aboard the aircraft USS Carrier Tarawa CV40. Upon discharge, he returned home and began classes at Alma College, earning a bachelor’s degree in 1956. In 1956, while on a visit home to Onaway, superintendent Mike Merritt offered him a teaching position following the death of his former high school band director, Mr. McClutchey. Karan’s heart was always in Onaway and he gladly took the position. This was the beginning of his long teaching career in his hometown.

From 1956 until his retirement in 1984, Mr. P touched the lives of many Onaway students.  He was an influential teacher who shared his passion for music, debate and public speaking. He encouraged his students to attend college and some to pursue careers in music. Because of his influence several students went on to further their education at his alma mater, Alma College. Many students went on to become band directors, music teachers, English teachers, attorneys, debate coaches, and professional musicians not to mention all the many students who continued to play in bands and make music long after they graduated from Onaway High School.

Under his direction the Onaway school bands excelled with the best symphonic, marching, pep, and jazz bands in northern Michigan.  The community was blessed and fortunate to have Mr. P’s dedication, as the Fourth of July parade was always led by his band and the high school football games had the best half-time show in the north. An excellent speech and public speaking teacher, he also coached debate. His debate teams were not only the best in northern Michigan, but the best in the entire state winning many district and state championships during his tenure as coach.

Karan kept a meticulous yard and was an avid gardener. His grass was lush and green like a golf course and his vegetable garden was amazing.  There wasn’t anyone who could grow tomatoes like Karan Pregitzer. With a bumper crop every season, his tomatoes were more like small trees.  He had plenty of harvest to eat fresh, share with friends, neighbors, and family and for canning for the winter months. Every summer he planted a special tomato plant for his friend Bob Dunston, who loved to eat cherry tomatoes while watching his beloved baseball games. After retirement, Karan loved to fish and had time to fish with his grandson Anthony from the banks of the Stoney Creek and ice fish on Kleiber Pond. He always continued to support Onaway High School athletics. Frequently, he could be seen with his good friends Jim Hall, Bill Comfort or Harley Robbins at the football and basketball games cheering the Cardinals on to victory. A day rarely went by that Karan didn’t go into town, usually in the morning, for his daily visit to the local coffee shops and then back again in the afternoon. He always enjoyed talking with old friends, former co-workers, and students and spent time catching up on the latest happenings in Onaway.

Community and civic-minded, Karan had served on the Onaway school board after retirement.  He was a lifetime member of the Masonic Lodge, the Navy Musicians Association and local Veterans of Foreign  Wars post.  He had also been a member of the Onaway Lions Club.  He was one of the founding members of the Straits Area Concert Band in Mackinaw City playing with them every summer for 30 years thru the 2018 season.  He was happy to have played with his grandson Anthony in that band for 14 of those 30 years. Karan couldn’t have been more proud of his grandson who will soon be starting his doctorate in music performance. Anthony and Karan always had a special bond through their mutual love of music and jazz in particular as Karan had played jazz gigs across Michigan as a young man and later on with the Star Dusters Jazz Band.

Strong willed and fiercely independent, Karan did things his way. He liked everything neat, organized and tidy. He was so meticulous about his band room he’d frequently bribe his daughter Renee and some of her friends to pizza at the 211 if they would help him “sort music and sort uniforms.” Many of his students remember him always saying a famous quote, “There’s No Rest For the Wicked” and at one time in the band room another famous motto for his students was displayed on the wall above his podium reading, “Success is 10 pecent Inspiration and 90 percent Perspiration.” Very true words indeed.

Karan’s final resting place will be at Waverly Township Cemetery. A private family memorial Celebration of Life is being planned for late August.

Those wishing to celebrate and remember Karan Pregitzer may consider a donation to: The Band Department, c/o Onaway Area Community Schools, 4549 M-33 Hwy, Onaway, Michigan 49765. Please specify the Band Department to direct your donation. Or consider a donation to: The Friends of the Onaway Library, P.O. Box 742, Onaway, Michigan 49765

Cremation has taken place. Cremation and arrangements were in care of the Chagnon Funeral Home, Onaway.