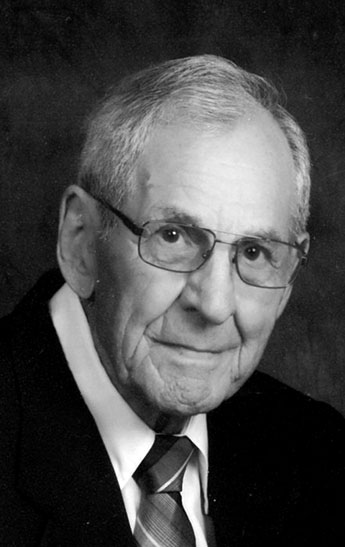 Donn was born July 23, 1923 in Detroit to Herman and Fannie (Emmett) Widmayer and graduated from Pinckney High School.

Donn graduated from Michigan State University (MSU) with a Bachelor of Science degree in civil engineering in 1951 and went to work for U.S. Steel. He managed limestone and ore in Rogers City, Cedarville, Lander, Wyoming and Virginia, Minnesota, where he retired as general superintendent of Minnesota Ore-Division of U.S. Steel in 1984.

Donn and Daisy moved to Marshall after his retirement and enjoyed traveling in their recreational vehicle and going to their winter homes in Alabama and Florida for many years. Donn was a member of First Presbyterian Church in Marshall and was an avid MSU sports’ follower.

He is survived by his wife, Daisy of Marshall; daughters, Mary (Robert) Barton of Troy, Kaye (Tom) Jo

Memorial contributions may be directed to First Presbyterian Church in Marshall.

Due to the current concerns of the novel coronavirus (COVID-19), a memorial service and interment will be held at a later date in Chelsea.