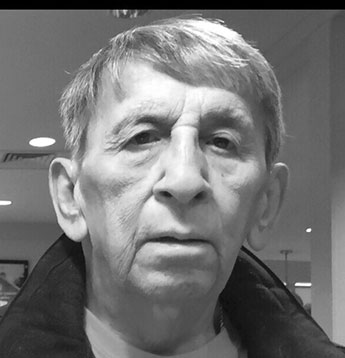 Michael was a proud Native American hailing from the Red Cliff Band of Lake Superior Chippewas. He is preceded in death by his wife, Donna Lee (Retlick) Deragon; and son, Todd Allen (Brousso) Deragon.

Michael is survived by his sons, Troy William Brousso of San Antonio, Texas and Michael Louis Deragon II of Breesport, New York; and a granddaughter, Willow Lee Deragon of Breesp

Michael leaves behind many cousins, nieces and nephews throughout Wisconsin and Michigan.

Michael was a member of Holy Family Catholic Church of Bayfield and Saint Mary’s Our Mother of Horseheads. Michael retired after 36 years from U.S. Steel where he worked on the Great Lakes as a steward and merchant marine. After retirement, Michael moved to be with his sons and granddaughter. Michael enjoyed watching the Elmira Pioneers with his granddaughter.

Private family services will be held at a later date due to pandemic protocols. In lieu flowers, those wishing to remember Michael please consider donations to American Cancer Society, P.O. Box 22718, Oklahoma City, OK 73123-1718. Special thanks to the Faulk Cancer Center for all its efforts and Meals on Wheels. Condolences and words of comfort may be expressed at Michael’s Book of Memories at www.sullivansfuneralhome.com