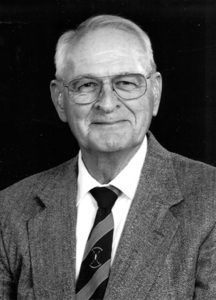 Gerald was born November 29, 1931 in Michigan City, Indiana. His parents, Steven and Helen Waite and only brother, Donald, preceded him in death. Gerald and Joanne, his wife, moved to northern Michigan in the early 1950s spending a year or so in Atlanta before moving to Onaway.

Gerald attended Indiana University on a golf scholarship and continued to enjoy the game his whole life. He received his master’s degree in education at Michigan State University. Gerald was an educator and spent the early years of his career, teaching. He was the first speech therapist in northern Michigan and became the director of special education for the Cheboygan, Otsego, Presque Isle Intermediate School District. In that capacity, he pioneered programs for autistic children in the district.

Gerald was active in the community and his church. He served on the board of the Onaway Federal Credit Union. After retirement, he served on the Onaway Area Community Schools board of education. He was an active participant in several golf leagues in both Onaway and Cheboygan. During his retirement he enjoyed making furniture, beekeeping, fishing and

Visitation and a rosary service were held at Chagnon Funeral Home.  A funeral Mass and graveside service will be held at a later date. Gerald’s final resting place will be at St. Paul Catholic Cemetery in Onaway. Those planning an expression of sympathy please consider a donation in memory of Gerald to McLaren Home Care and Hospice, c/o McLaren Northern Michigan Foundation, 360 Connable Ave., Suite 3, Petoskey, MI 49770.