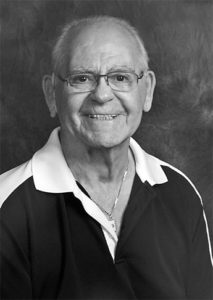 Joe was born August 24, 1929 in Detroit to Abraham and Margaret (Williams) Gabara with the family later moving to Alpena.  He served in the United States Navy during the Korean Conflict.

A longtime businessman in Rogers City, he owned and operated Gabara Motor Sales and was active in the Rogers City Lions Club for many years.  Joe was very outgoing, lively and a friend to many.

ass="Apple-converted-space">  He was preceded in death by a son, Joseph, and an infant son, Scott; a daughter-in-law, Nancy Gabara; and his siblings, Elwood, Eleanor, Merton, George, Fay and Ardith.

A graveside service was held Tuesday at Memorial Park Cemetery in Rogers City with military honors provided by the Rogers City Veterans of Foreign Wars Post 607 and services by the Rev. J. Derek Riddle.  In lieu of flowers please make memorial donations to St. John Lutheran School or Hospice of Michigan.

Arrangements are in care of his longtime family friends at McWilliams Funeral Home. Online condolences may be registered at www.mcwilliamsfuneralhome.com