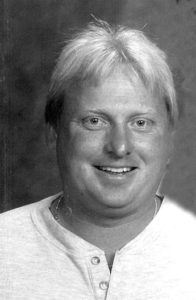 Michael Philip Polluch was born in Alpena November 10, 1961, to Isidore and Virginia (Kuznicki) Polluch. He graduated from Alpena High School Class of 1979.

Mike was known for his kind heart, sense of humor and his generous nature. Mike worked for the local pizza place and after graduation he bought it naming it after his father, Izzy’s pizza, continuing to own the building which is now a music shop and beauty shop.

Mike retired from UPS after working for 30 years and has since worked at several different places including, driving school bus, DPI, Losinski Excavating and sailing with his brother, Steve, on the Edgar B. Speer.  He loved the sport of boxing, going to the Hall of Fame in New York, where he has met, obtained autographs and photos of numerous boxers.  Mike’s interests also included Mopar Cars and playing cards with his euchre group.

He was a member of St. Bernard Catholic Church, Knights of Columbus, served on Alpena City Council, city zoning board and has owned Lee’s Miniature Golf for many years.

Mike was preceded in death by his father, Isidore; and brothers, Steven and James.

Memorial visitation will take place at the Bannan Funeral Home Friday, August 21, from 10 a.m. – 1 p.m. and will continue the same day at St. Anne Church of All Saints Parish from 2 p.m. until the time of Mass of Christian Burial at 3 p.m. with the Rev. Joseph Graff officiating. Inurnment will be at Holy Cross Cemetery.

In lieu of flowers, memorials may be made to Friends Together.