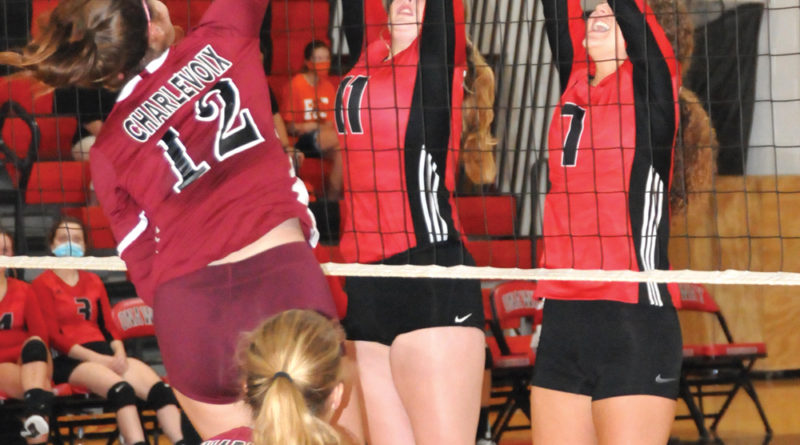 “In the Rogers City match, we finally put together some good, fundamentally sound volleyball,” said Onaway coach Steve Watson. “We still made errors but we had much better transition from defense to offense and the team did a nice job of turning the tide back in our favor when RC made a run of points.”

Watson was pleased with the overall decision-making in the match. Breya Domke had 21 kills, while Aubrey Benson had 11. Cloe Ehrke had 24 set assists.

Rogers City coach Jon Hoydic, who took over the program before the season, was taking some of the blame for the back to back losses Tuesday against Onaway and Charlevoix (12-25, 15-23, 24-26).

The final loss was particularly disappointing after Charlevoix rattled off eight-straight points to steal a win away from the Lady Hurons in the third set.

“I feel like we are really close to everybody that we are playing,” said Hoydic.

He commended Jeffra Dittmar for her outstanding play and quick improvement at the outside hitting position. He also thought sophomores Alyssa Jo Hein and Kaitlyn Nowicki both deserved recognition, saying, they never looked overmatched.

“Captain and libero Kristin Brege was all over the floor taking on and handling everything some really tough hitters were throwing at her. I thought she provided a superb example of the level of hard work and determination that I’m looking for from everyone on our team,” said Hoydic.

Rogers City’s first match in the Alpena Quad was against Hillman and the girls came out fired up.

“Overall, it was an eye opener for all of us that we needed to work for all three sets if we were going to have success,” he said.

The Hurons lost to the host school Alpena in the final match (20-25, 10-25, 21-25). “Our girls bounced back playing a very good Alpena team very tough,” said Hoydic. “I thought our composure, determination, and work level was excellent in that match.

Madeline Hardies was also stellar with 16 assists and four aces, the coach added. Rogers City will be in Posen, Sept. 10.

The Cadillac quad was as tough as expected with the host school, Leland and Forest Hills Northern, a Division 1 school from Grand Rapids.

“We talked about how difficult the day was going to be,” said Watson. “I said to them that some teams go down to the state finals and watch those teams play. I said, we are coming here to play these teams.”

According to Watson the play improved from the previous Saturday at Pellston, “but it is difficult to play your best when other teams are having their way with you.”