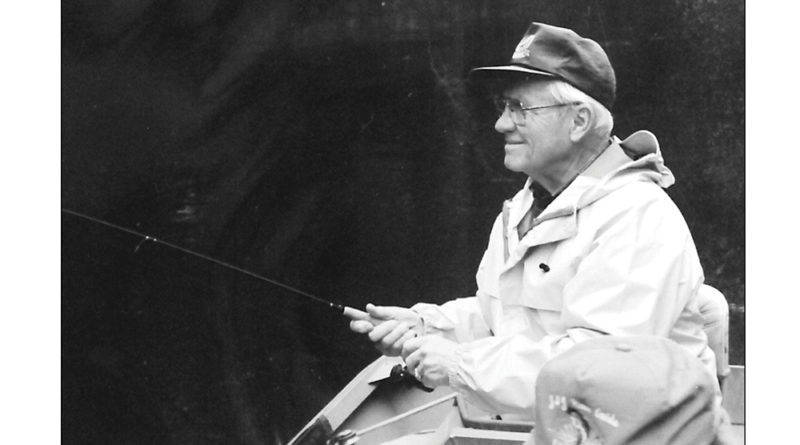 in Petoskey. Harry passed away five days short of his 101st birthday. An important detail to note is that he died on Election Day, after sending in his ballot absentee.

How can you summarize the life of a man who has done it all? As difficult as that task might be, living without Rogers City’s first citizen will be more difficult.

Harry took leadership roles in every organization he joined and remained dedicated to community service until the day he died.

To list the organizations Harry belonged to would be taking a chance of missing some. He served on many national, state, regional and local boards and commissions from the time he was a young man until his last years. An example of his longevity is his service on the Calcite 50th anniversary committee in 1962 and again on the Calcite Centennial Committee in 2012. But that is only one of many, many groups that benefited from his service.

Listing major honors bestowed on the energetic former newspaper publisher would fill a page of the newspaper he supported all his life.

Most recently, Harry had a building named after him at by the Michigan Department of Natural Resources (MDNR). It is an honor he called something that “couldn’t have been any nicer thing to happen to me.”

A request by the late Raymond Spain, who was then the Rogers City Area Chamber of Commerce (RCACC) executive director, to the MDNR got the ball rolling. MDNR director Keith Creagh gave Harry the news in a letter.

“For some time, several influential individuals have been advocating for a public, lasting recognition of your many years of service to the state of Michigan,” Creagh said.

The dedication of the Harry H. Whiteley Conservation Education building at the Ralph MacMullen Conference (RAM) Center in Roscommon in May, 2013 honored the man who served more than 25 years on the Natural Resources Commission (NRC).  Whiteley led the commission for six terms as chairman. That is more than any other person in the long history of the commission.

A who’s who parade of state dignitaries came out that sunny spring day to honor Harry, who was visibly moved by the honor.

“Harry, you deserve this honor and I am glad we are doing this for you,” said Keith Charters, chairman of the NRC, at the dedication. “Harry is the single reason I became a commissioner. The people of Michigan owe you great gratitude and this is a very, very small token of that gratitude.”

Bill Rustem, director of strategy for Gov. Rick Snyder, read a letter from the governor.

“It is fitting that a building at the Ralph A. MacMullan Conference Center be named after you. Your tireless devotion to conservation education is evident through your career in the newspaper business and your civic involvement as a member of the NRC for 25 years.”

The RCACC also honored Harry at its sold out annual banquet in November, 2011. Friends from Harry’s wide-range of activities stepped to the podium to offer praises to Harry and tell those too young to remember some of the accomplishments he achieved in his long and productive life.

“Your appointments to serve have been made by mayors, governors, state legislators and even the president of the United States,” said master of ceremonies David Nadolsky.

“Harry, you are the wind beneath Rogers City’s wings,” said the late Mike Eustice, a presenter and member of the banquet committee.

Then-mayor Beach Hall read a proclamation making it “Harry Whiteley Day” Nov. 5, 2011 and presented a framed copy of the resolution to Harry. The resolution acknowledged his activity at the state and local levels and remembered his lifetime achievement award given by the city some years earlier.

“It is with pleasure to recognize Harry Whiteley for his special service to the community and the citizens of Michigan. Harry Whiteley is a dedicated community leader, outdoor enthusiast, and small business owner. It is with great admiration and deep gratitude that we applaud him for a lifetime achievement award from the Rogers City Area Chamber of Commerce,” Pettalia said.

Harry himself had the chance to respond to the roasts and toasts and offered advice at the 2011 banquet. Even at his age of 90, Harry said then, he had energy and ambition to attack each new day.

“For whatever I have done all these years, I attribute it to good luck and being in the right place at the right time. Had I not met a man named Fred Alger, I would never have had the wonderful experience of traveling with Gen. Dwight D. Eisenhower on his campaign train when he ran for president of the United States. Had I not traveled the state while working with Mr. Alger while working as his campaign manager when he ran for governor, and met most every newspaperman in every town that had a newspaper, I would never have been president of the Michigan Press Association (MPA),” he said.

He closed his comments with a word of advice.

“Get involved. We only grow old when we stop doing things. There are all kinds of things we can do and there are organizations all over the place,” he told the chamber gathering. Give time to others, he said.

“Zero in on the sick and the lonely. It makes you feel good when you go to see those people. Being involved is important in other ways. You will feel you have done something for your community, you make new friends and renew old acquaintances, and you are doing a service. You are going to feel refreshed for what you have done,” Harry said.

Harry Hoeft Whiteley, the grandson of lumber baron Paul H. Hoeft and son of longtime newspaper publisher William Harold “Hal” Whiteley and his wife Leila Hoeft Whiteley, made a name for himself both locally and in Michigan. He was born Nov. 8, 1919 at the Good Samaritan Hospital in Los Angeles.

A 1937 graduate of Rogers City High School, he was editor of the high school newspaper, captain of the football team and class president. He recovered from a serious illness that kept him bedridden for nearly two years following his graduation from high school.

After several years of employment with the Midland Daily News and the Niles Daily Star, Harry came home to Rogers City in the late 1940s to go into business with his father, Hal. He helped the small business grow from a small staff of three to 12 employees, moving the business from its quarters on Second Street to the corner of Third and Erie, home of the former Hoeft Department Store. The move included the installation of an offset press, with the first issue rolling off the press Nov. 3, 1960, the week before the election of John F. Kennedy as President of the United States.

Hal retired in 1962 after 50 years in the business, following his purchase of the newspaper in 1912. As the town grew, the newspaper continued to grow in the 1960s and 1970s under the guidance of its energetic leader. Harry’s crew published the largest edition up to that time to commemorate the 1971 centennial celebration in Rogers City.

In addition to guiding the newspaper operation, he devoted much time to public service and politics. Kim Sigler, a candidate for governor in 1946, stayed overnight at Hal’s residence while on a campaign swing through northern Michigan, along with a candidate for secretary of state, Fred Alger. Sigler invited Harry along to campaign during the tour, sparking Harry’s interest in politics.  Harry then ran Fred Alger’s campaigns for governor in 1950 and 1952. Harry was a delegate to the 1952 Republican National Convention in San Francisco, which nominated Gen. Dwight D. “Ike” Eisenhower for president, later traveling with Eisenhower on the campaign trail.

He was the first chairman of the Downtown Development Corporation in Rogers City, chaired the Thompson’s Harbor State Park Advisory Commission and served as president of the Presque Isle County Sportsmen’s Club.

He was appointed by former President George H. W. Bush in 1992 to serve on the Great Lakes Fisheries Commission. He has served on the board of directors of the Greater Michigan Foundation, the Alpena Community College Foundation and the Jesse Besser Museum.

Beloved in his hometown, he was named the “Outstanding Citizen of the Year” in 1969 and served as grand marshal of the first Nautical City Festival Grand Parade in 1977. Several contributions have come from his connections with the MDNR, where he had a voice in saving the Ocqueoc Outdoor Center buildings and securing grants for the Rogers City Marina and the nonmotorized trail through the city to 40-Mile Point Lighthouse.

He earned appointments and served under five governors, John Swainson, Romney, William Milliken, James Blanchard and John Engler. Upon his retirement from the Michigan Travel Commission in 1995, he had served 33 years on state boards, believed to be a record of longevity.

He is a past president of the RCACC and had been associated with the board of directors beginning in 1949. He achieved an honorary lifetime board of directors seat and remained active into his 90s. He resigned from the board in spring of 2013, citing the inability to hear people speak at the meetings, but remained interested in the chamber as well as city and county government.

The chamber recognized him with a dinner in his honor in 1984 and again in 2011 when he earned a lifetime achievement award.

His occasional column in the Presque Isle County Advance, that he continued writing up through this year, kept his ideas in the forefront of public opinion.

Harry had the chance to meet many famous people in his lifetime including Eisenhower, whom he voted for at the national convention and later campaigned with in 1952; future President Richard M. Nixon; future President Gerald Ford, when he was chairman of the Kent County Republican Party in 1952 and Gen. Douglas MacArthur, who spoke at the MPA’s annual convention with Harry as one of the organizers of the event.

Harry even had lunch at the White House with former President John F. Kennedy March 16, 1962. That came as part of an invited group of 23 newspaper publishers from all across Michigan.

The Whiteley family era of ownership at the Advance ended in 1984 when he sold his interest in the newspaper to the late Richard Milliman a respected newspaperman from Lansing and former press secretary for Romney. But Harry’s influence on the Advance, and publisher Richard Lamb extended until his death. He often offered guidance to Lamb on newspaper skills learned over many years and supported the newspaper and its mission.

Harry wrote a popular column ‘Round and About, taking the name from his father’s column. The name of the column changed to Potshots from Petoskey after he and his wife Betty moved from their beloved home on Erie Street in Rogers City to a retirement complex in Petoskey in 2015.He and former Advance columnist and Rogers City businessman the late Karl Vogelheim often exchanged banter in their Advance columns. Harry, a de

voted Republican, and Vogelheim, a staunch Democrat, brought a lively and sometimes heated discussion to the editorial pages of the Advance, but remained lifelong friends.

Harry Hoeft Whiteley will certainly go down in the history books as one of Rogers City and Presque Isle County’s most influential citizens ever.

(Next week, Harry says goodbye in his last column.)