Patricia Ann Young, “Pat Young” was born in Detroit to a single mother, Gladys Tucker, May 14, 1941 and passed away peacefully Saturday, December 19, 2020 at home. She was 79. Pat relocated to Onaway in 1984 and was quite active in the community. Generous with her time and hardworking, Pat was a great volunteer. She was instrumental in the building of Chandler Park, was president of the Onaway Chamber of Commerce and served as an Onaway city commissioner. Well-known at the local bingo halls she called bingo at St. Paul Catholic Church and the Onaway George C. Garms Veterans of Foreign Wars Post 5857 Hall. Set in her ways, Pat had her own way of doing things. Her family was a priority and her greatest joy. 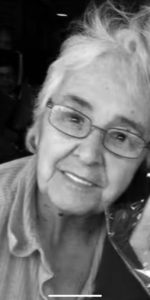 Pat was preceded in death by her partner of 47 years, Judith Lupu; her mother, Gladys Atkins; and a sister, Sylvia. She is survived by her two daughters, Brenda (Cliff) Brooks of Auburndale, Florida and Annette (Tim) Porter of Onaway; her son, Tim Lupu, of Bellevue, Nebraska; as well as 17 grandchildren; 23 great-grandchildren; and a great-great-grandson. Pat also leaves three sisters, Ruth, Denise and Bonnie; a brother, Cliff; and many nieces and nephews.

It was Pat’s wish there be no services following her death.  She will be honored privately by her family. Cremation arrangements were in care of Chagnon Funeral Home.