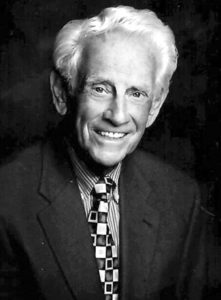 Lyle’s legacy was first and foremost love of family, responsibility and loyalty to all who worked with him in his hometown of Onaway and the great city of Cincinnati.

Being a farm boy, Lyle knew hard work was the key to success. He served in the U.S. Army during World War II, receiving a Purple Heart. After returning from service, Lyle went to work at the local Kroger store. His career started there in Adrian stocking shelves and bagging groceries. After 44 years, Lyle retired as CEO and chairman of the Kroger Company. He served on the boards of many companies, such as Bethesda Incorporated, Cincinnati Milacron, The Central Trust Company, Capital Holding C

orporation and Federated Department Stores. He served as trustee for the University of Cincinnati (UC) and received honorary degrees from UC and the University of Toledo. In 2002 he was featured as one of the chamber of commerce’s “Great Living Cincinnatians.” Lyle’s charitable spirit was demonstrated through his involvement in The United Way, St. Rita School for the Deaf and many other charities. Life was not always about work. He enjoyed traveling, the beauty of flowers, and playing golf with his son, Mark. His life accomplishments were achieved by hard work, kindness, modesty and respect toward others.

Services will be held privately. In lieu of flowers please consider a contribution to Hospice of Cincinnati.  Condolences to rohdefuneral.com.