Kwang Soon Baker, known as “KJ,” 87, of Onaway, died Monday, January 4, 2021 at her daughter’s home in Oden. Born in Seoul, Korea January 22, 1933, KJ was the daughter of Soo Chang Soung and Bo Jun Park. KJ first met Donald “Don” Baker while he was serving in the Army Air Corp during the Korean War. They married in Seoul, Korea February 12, 1956 and shortly after, KJ, young and courageous, left her family and everything she had ever known to start a life with her new husband in his home town of Onaway in northern Michigan. 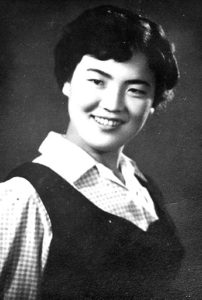 After leaving her family in Korea to move to the United States, KJ became close with Don’s family and they welcomed her with open arms. Her sisters-in-law were more like actual sisters and they enjoyed doing things together. In particular they enjoyed going to garage sales in search of a great deal or wonderful treasure.  KJ was always looking for dolls or tins to add her large collection.

And of course, through the years there were many family gatherings when all the family was together for holidays, celebrations, dinners and barbeques. KJ always loved these times together.  With her great sense of humor, KJ laughed easily and was well-liked. She had a wonderful group of girlfriends who enjoyed getting together for lunch at the local restaurants where they would fill a large table, share stories, and laugh. KJ was a former member of the Onaway United Methodist Church. 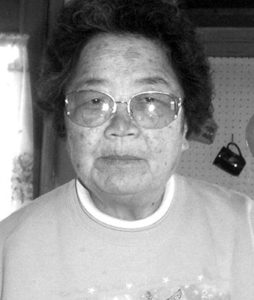 KJ was a homemaker, a devoted wife, and a loving mother. An excellent cook, she was skilled in the kitchen, cooking delicious American dishes, but her specialty was Korean cuisine, which was a treat for everyone. Extremely talented, KJ had the ability to look at things and then create them; no pattern or directions needed. She crocheted, sewed and crafted. Quite an artist, it seemed whatever she was working on would end in a superb finished product. Truly an angel, KJ was a wonderful aunt and sister-in-law, a loving grandmother, and an aweso

me mother who put her family first. Devoted to Don, she adored him and the two were like two peas in a pod. KJ is survived by her daughter, Kathy (Mike) Martin of Oden; a son, Donnie Baker of Lansing; granddaughters, Haylee Baker (Eric Rae) and Zoie Martin; a sister-in-law, Grace Preston of Onaway; and nieces and nephews as well as her family in Korea. She was preceded in death by her husband of 64 years, Donald J. Baker February 13, 2020; a sister-in-law, Lou Ann and her husband, Kenny Perkins; a brother-in-law, Lyle Preston; and her parents and siblings in Korea.

A graveside servic will be held at Hillcrest Cemetery in the spring. There are no services at this time. Those planning an expression of sympathy please consider a donation in memory of KJ to the Onaway Community of Christ Church.