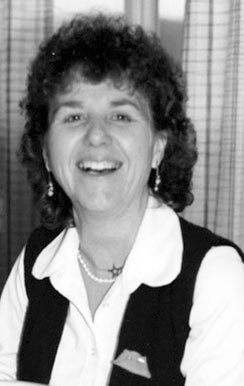 Ella, or Joann as everyone knew her, was born in Onaway where she lived with her three sisters: Nancy, Patricia, and Lois. She eventually married her husband, Richard “Dick,” and they moved to Wisconsin. During their time there, Joann had her first child, Tom. Soon after, the family moved back to Onaway where she had two more children, Tammie and Tim. She and Richard remained in Onaway for the rest of their lives.

Joann was a crafter. If you were part of the family and were graduating high school, having a baby, or getting married, Joann always had a blanket and possibly a pillow made for you as a gift. Her log cabin pattern for her blankets was one that was not easily matched. She also made Barbie doll clothes, dolls, and many other items that she would give to someone for a special occasion or would donate to the Onaway Antique Tractor Club for their raffle during the tractor show in July.

If you have been to the tractor show, you have seen Joann in the kitchen helping to prepare and serve the concessions. You might have also seen her walking around and taking pictures. In the early years of the club she also ran the raffle table. Every summer Joann would go shopping (usually with her granddaughter) and find items for the raffle and get supplies needed for the concession stand.

The one thing Joann loved most was her family. With her sons and daughter close to home she never had to worry about people coming over for the holidays. When her daughter had a daughter of her own, Joann was able to watch her granddaughter when needed, which she enjoyed every minute of. No

matter if you were related or not, Joann thought of everyone as family. She will be missed very much by everyone who knew her.

Preceding Joann in death were her parents, Tom and Joyce Vanzant of Onaway; a sister, Nancy Thornton of Cheboygan; and her husband, Richard “Dick” Hart of Onaway. Surviving Joann are her sisters, Patricia (Nute) Chapman and Lois (Bob) Nash, both of Onaway; sons, Tom and Tim Hart; and daughter, Tammie (Bob) Henning, all of Onaway; and a granddaughter, Grace Henning of Mt. Pleasant.

A graveside memorial service will be held at Waverly Township Cemetery Saturday, May 15, at 1 p.m. The Elder Thelma Curtis will officiate.  Those planning an expression of sympathy please consider a donation in memory of Joann to the Tip of the Mitt Antique Tractor Association.  Arrangements were in care of Chagnon Funeral Home.