Scott Steven Campbell, 35, of Charlotte, North Carolina, formerly of Onaway, died unexpectedly May 2, 2021.  Born in Santa Rosa, California July 26, 1985, Scott was the son of Steven and Deborah (Eskew) Campbell.  He is survived by his mother, Debbie Campbell (Bill Graham) of Onaway; a sister, Julie (Mac) Morgan of Onaway; and the nephews he adored, Alex and Andrew.  Scott also leaves his grandparents, Jerry and Gloria Eskew of St. David, Arizona; his aunt, Betty and aunt, Janice and aunt Sherry; as well as many friends.  Scott was preceded in death by his father, Steven Campbell; and grandparents, Jim and Glenna Campbell. 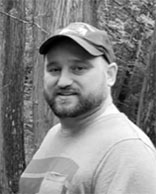 A 2003 graduate of Onaway High School, Scott went on to join the Navy.  He served on the USS Kitty Hawk supercarrier in the South Pacific and was honorably discharged the same year the Kitty Hawk was retired. Scott came home and started classes at Alpena Community College and went on to earn his bachelor’s degree from Central Michigan University. Scott moved to Charlotte, North Carolina where he worked for George Mason Mortgage as a loan processor.

An avid outdoorsman, Scott enjoyed fishing, hiking and camping. He loved hanging out at the beach and softball league and weekend tournaments with Julie, Mac and his many friends.

Hardworking and motivated, Scott spent much of his free time making improvements and fixing up his home.  He loved taking his dog, Tucker, for walks but most of all he enjoyed being with his family. He treasured his mother, his sister, his brother-in-law and grandparents. His nephews were his favorite people in the worl

d and held a special place in his heart. He would stop whatever he was doing to take their phone calls, showered them with generous gifts, and always looked forward to coming home to Onaway to see them. With his unique and enthusiastic personality, Scott was good-natured, well-liked, and fun to be around. He had a fantastic sense of humor and an infectious laugh. Scott would help anyone out in any way he could including opening his home to others to give them a place to stay. Scott’s zest for life, his kindness and generosity, his love for his family, and his cheerful smile will be missed and always remembered.

A Celebration of Life will be held at a later date. Those planning an expression of sympathy please consider a donation in memory of Scott to his family to help with expenses.